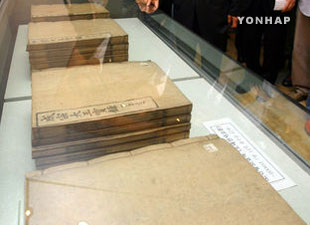 The government is seeking to hold a joint exhibition with North Korea featuring all four copies of the Annals of the Joseon Dynasty, known as the Joseon Wangjo Sillok.

The annals, which were designated as a national treasure in 1973, have been printed several times out of concerns they could be destroyed. UNESCO listed the books on its Memory of the World Registry in 1997.