Great filmmaker Im to get French Legion of Honor 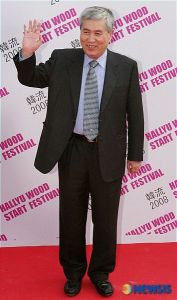 Korea's top filmmaker Im Kwon-taek will receive the Order of the Legion of Honor from the French government on Friday, in recognition of his decades of contributions to the field of visual arts.

The ceremony will be held at 6 p.m. at the residence of the French ambassador in Hap-dong, Seoul.

"Im Kwon-taek will be awarded the title of Chevalier de l'Ordre de la Legion d'Honneur by French Ambassador Philippe Thiebaud for his long and active career, and especially for his contribution to defending the movie industry and to promoting Korean movies in France", the French Embassy said in a press release.

Im has already won numerous awards, including the best director award at the 53rd Cannes Film Festival. The embassy said the decoration is also meant to honor Im's dedication to the celebration of the 120th anniversary of diplomatic relations between France and Korea.

Created in 1802 by Napoleon Bonaparte, the Legion of Honor is the highest award given by the French Republic, regardless of the social status or nationality of the recipients. Im, 71, is also set to receive the lifetime achievement award at the fourth Dubai International Film Festival, which will run from Dec. 9. The Dubai film fest is regarded as one of the leading such events in the Middle East. Previous lifetime achievement winners include Oliver Stone and Morgan Freeman.

According to the Pusan International Film Festival organization committee, the Deauville Asian Film Festival on the French Atlantic coast in Normandy will also hold a retrospective on the Korean director in March 2008. Im's heightened stature in the international film world is becoming increasingly clear.

He has, so far, made 100 films. The latest one was "Beyong the Years" ("Cheon-neon-hak"), an arthouse take on the resonant theme of love and suffering. The movie, depicting life and its fleeting nature in a meditative fashion, was hailed by critics as a new artistic milestone, but it failed to attract mainstream moviegoers when it was released in April.

At the PIFF held in Busan last month, "Beyong the Years" ("Cheon-neon-hak") was invited to the Gala Presentation section, but Im expressed his disappointment with the poor box-office results early this year: "Since the release in April, it seems like only a few people have watched my new movie, and I'm feeling like I'm unveiling the film for the first time here at the Pusan International Film Festival".

Concerning this tepid reaction from moviegoers, Im said his latest movie seems to have focused too much on the meditation and musings for a new generation of viewers which is accustomed to fast-paced, explosive Hollywood flicks.

Im's recent setback, however, can hardly diminish his illustrious achievements as a master storyteller. He made his debut in 1962 with "Farewell to the Duman River", and has a huge following, especially among actors and younger filmmakers. For 45 years, he has been producing films at a vigorous pace.

Im, after all, is a movie director who used to know how to tap into the pulse of the mainstream moviegoers. For instance, in the early 1990s, he set new box-office records with his "The General's Son" series.

"Seopyeonje", released in 1993, was also a huge hit, breaking the earlier box-office record that Im set himself, while opening a landmark chapter in the history of Korean movies for the so-called "1 million audience" era.

A decade later, he won the prestigious Best Director award at the Cannes Film Festival for "Chihwaseon", the first such honor bestowed on a Korean filmmaker. The achievement dramatically elevated Im's status in Korea and around the world. This coincided with the growing interest in Asia and beyond in Korean cinema and other forms of pop culture -- exemplified by the Korean Wave.

"Chihwaseon" marked Im's second appearance at Cannes, after his entry with the classic Korean love story, "Chunhyang", in 2000.

In his early career, Im built his name as a commercial filmmaker who directed several pictures a year, thereby helping to fulfill the quota for domestic pictures set by the government. The first turning point in his career came in 1981 when he made "Mandala", and emerged as a serious cinematographer. Since then, Im has been exploring traditional themes and the Korean cultural identity.

In honor of his achievement, Dongseo University in Busan has decided to establish the Im Kwon-taek Film and Arts College in 2008. Last month, the university launched a film research center named after the director, collecting various material related to Im and his films, such as original film prints, video tapes, DVDs, books and academic papers. Im will begin teaching students as professor emeritus at Dongseo University in March of next year.

"Great filmmaker Im to get French Legion of Honor"
by HanCinema is licensed under a Creative Commons Attribution-Share Alike 3.0 Unported License.
Based on a work from this source