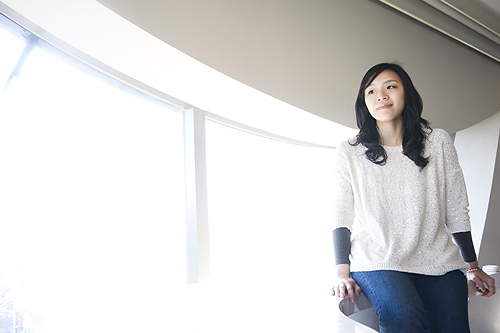 Grand Prix winner at the recently wrapped 34th Clermont-Ferrand International Short Film Festival, "Guest" is director YOON Ga-eun's third short. In it, a high school student Ja-gyoung belatedly realizes her father has been having an affair and bursts into his mistress's house where she encounters a young brother and sister. LEE Young-jin interviewed the young director for "Korean Cinema Today" (KCT).
KCT: I heard the Grand Prix was a nice birthday present for you, coming right before your birthday?
YOON: I was really surprised when I heard the news about winning the award. I still really don't know why they gave it to me. The day my film screened in a huge 1,400-seat cinema, I was so tense I really thought I would throw up. I worried about what to do if there was a projection problem dozens of times, too.
KCT:It's a coming-of-age film that deals with childhood scars, but it's not of the usual coming-of-age genre. At some points, the film even has the feeling of a detective film or a kidnapping drama.
YOON: Maybe that's why. The audiences in Clermont-Ferrand, unlike in Korea, all seemed to expect the director to be a man. Even the jury members, when they saw me at the awards ceremony, asked if I was really the director. (laughs)
KCT: It's not easy to find a film with such careful portrayal of characters' emotions. The dynamic between Ja-gyoung and the young brother and sister indirectly bring her rage and scars to light. The emotional effect is stronger than direct portrayal.
YOON: I enjoy watching reenactment dramas about affairs. In those dramas, they usually deal with conflict from the standpoint of the adults. But, children are likewise made the other victims of those conflicts, aren't they? I wanted to deal with family problems from the viewpoint of children.
KCT: I understand you majored in History in college even though you wanted to be a director from the time you were in middle school, and after graduating college, you chose the theater?
YOON: I was full of doubts as to whether I could actually create films, and I was always afraid.
KCT: But now you're in the Korean National University of Arts' film program. What are you working on next?

YOON: It's a feature about school violence. I like KOREEDA Hirokazu. He makes dramatic stories out of everyday things, and doesn't make easy judgements about characters. I want to make a coming-of-age film like "I Wish" one day.