One of the most important South Korean filmmakers, Lee Chang-dong, directs and pens another masterpiece, this time using a real-life case where a small town schoolgirl was raped by a gang of teenage boys, as a base, to focus, instead, on the character of one of the boy's grandmother. For the part, he chose, and actually wrote the lead part for Yoon Jung-hee, a star of the 60s and the 70s who had retired in 1994. The result is truly magnificent.

Mi-ja is an elderly woman who raises her teenage grandson by herself, since his mother has left him with her and moved to another city. She receives a pension from the state and works as a caregiver for a disabled man, but the money she receives is barely enough. Furthermore, she has to endure the beginnings of Alzheimer's that makes it difficult for her to remember even the simplest things, occasionally. However, she retains her cheerfulness and is almost constantly feisty, and even manages to attend some poetry lessons amidst all her issues. When the body of a dead teenage girl is discovered though, and her grandson, Jong Wook, seems to be involved in a case that is connected to the incident, along with a number of his classmates, she realizes she has to make some hard choices, while she has to raise a significant amount of money if she is to save him.

Lee Chang-dong uses the real-life case as a base but strays much away from it in order to focus on the life of the elderly in the country, and particularly the ones who live in the borders of society mainly because they have not secured a significant pension. In that fashion, we watch Mi-ja trying to survive on her own, almost without any help from the state or relatives for that matter, with the case of her grandson making her life even more difficult. 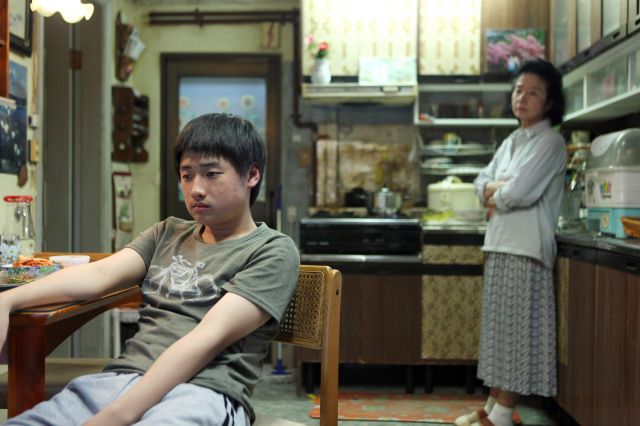 The generation gap is also presented, with her not being able to understand what her grandson is doing with his life and him treating her like a kind of a maid, with the sole exception of some games of badminton the two have. The first element is depicted quite thoroughly in a scene where Mi-ja is trying to use his computer.

Another comment regards society and the way it perceives justice, with Lee making a point of highlighting the fact that people think that money can make everything go away.

The film could have been a hard-hitting drama, but Lee implements a very different approach, which occasionally borders on comedy, through two axes. The first one is the concept of poetry and particularly the lessons and readings Mi-ja attends, which seems to stray completely away from the main case, but meets it in ingenious fashion during the end of the film. Through this concept, Lee also presents his thoughts on what is poetry and how people receive inspiration. 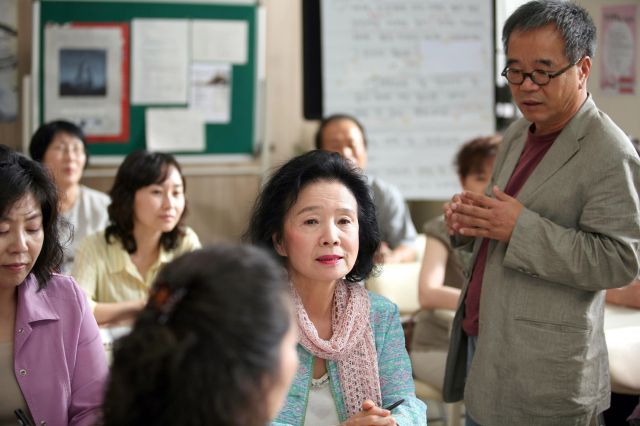 The second is Mi-ja herself, played with gusto and an almost constant cheerfulness by Yoon Jung-hee, who presents a woman who manages to retain her cheerfulness and smile despite her dire circumstances, in a measured but at the same time impressive performance. The scenes where she seems unable to cope with the reality of her grandson and the shocking acts that prove the exact opposite are the highlights of her performance, along with the scene when she finally erupts and confronts Jong Wook. Lee based the film almost completely upon her, as she seems to be present in every scene, and she delivered in outstanding fashion. Kim Hee-ra is very good as the disabled man Mi-ja takes care of, although a bit hyperbolic at times, while real life poet Kim Yong-tak gives a great performance as the teacher of poetry.

One of the film's best moments is its finale, with Lee presenting a truly shocking conclusion, in the same subtle but artful manner the whole narrative unfolds.

Kim Hyun-seok's cinematography retains the realistic approach of the film, while his framing is exceptional, as portrayed in scenes like the one where the parents are discussing in a private room and watch Mi-ja studying the flowers outside, and the one in the karaoke parlor. Kim Hyeon's editing retains a relatively slow pace, which fits the general aesthetics of the film perfectly. However, I felt that some scenes, particularly regarding the poetry lessons, could be avoided, since, at 139 minutes, the film seems to lag at some points. 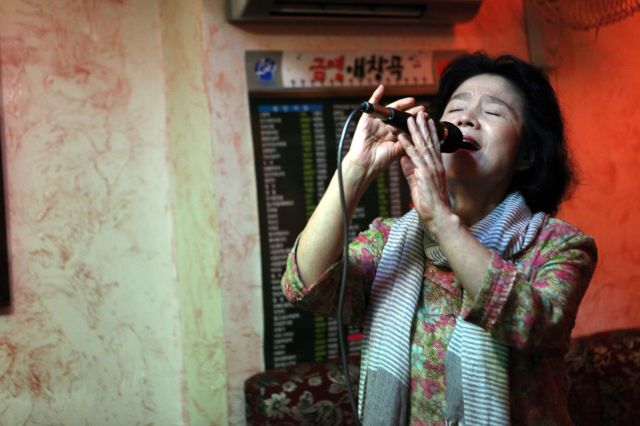 "Poetry" is a magnificent movie with very few faults, and a great testament to the quality of contemporary Korean cinema and Lee Chang-dong's prowess.

Available on Blu-ray, DVD, Online from YESASIA and Amazon