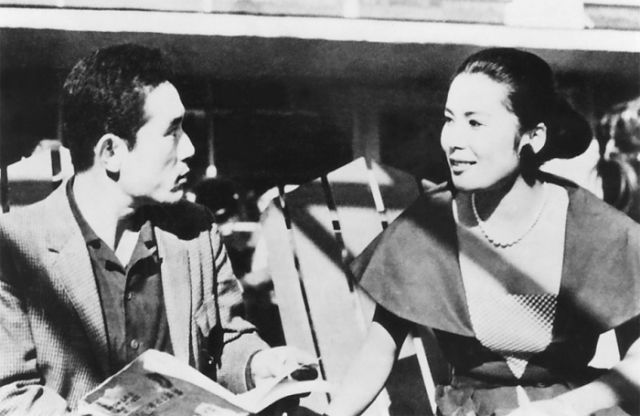 Considered by many as the best Korean movie ever made, "The Aimless Bullet" is a true masterpiece, and ode to realism focusing on the lives of the non-privileged in the country, in the post-armistice period. The then government banned "Obaltan" (its Korean name) because of its unremittingly downbeat depiction of life in post-armistice South Korea. An American consultant to the Korean National Film Production Center saw the film and persuaded the government to release it in Seoul so that it might qualify for entry in the San Francisco International Film Festival. Director Yu Hyun-mok attended the film's premier in San Francisco in November 1963 (source: Wikipedia).

The script is based on the awarded, homonymous novel by Yi Beomseon and revolves around two brothers, Cheol-ho and Yeong-ho, who share the same roof with their mother, who suffers from PTSD constantly screaming "Let's get out of here!", the former's wife and daughter, and their sister. The family is drowning in (financial) misery. Cheol-ho works as a clerk in an accountant's office, turning up as many hours as possible, without significant financial gain though, to the point that he feels that he cannot even go to the dentist to take care of an extremely painful toothache. Yeong-ho has not managed to get a job for two years since he has returned from the army, and aimlessly spends his time drinking with his war buddies. Their sister, Myeong-sook, used to be a nurse during the war, but following an unrequited relationship, she ends up whoring to American soldiers. Eventually, a shine of hope falls onto Yeong-ho, when a friends suggests him to play a part in a movie, and an accidental meeting with a nurse he used to have a crush on during the war, who seems to also have feelings for him. Alas, this is not a film where hope prevails in any way, with the heartbreaking finale highlighting the fact in the most dramatic fashion. 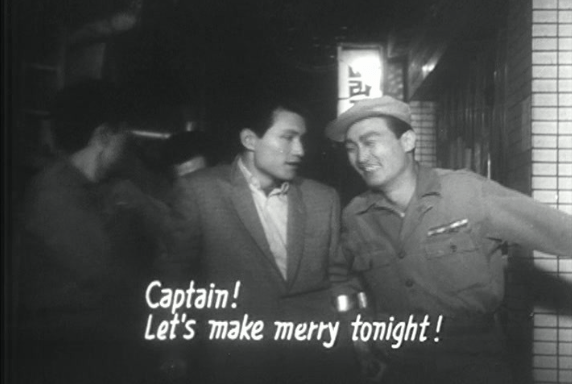 Yu Hyun-mok directs a film that thrives on the analysis of his characters, and particularly of the two brothers, with the focus being on Yeong-ho, a truly tragic figure who comes to realize that his achievements during the war mean nothing in the new Korea, in the most painful way. The way Yu deconstructs him, while presenting his downward spiral, is magnificent, highlighting the fact that despite his efforts, nothing works for him, but not due to a lack of struggle, but due to powers much higher than his. In that fashion, and as despair seems to take over both him and his former comrades, Yu justifies his actions during the finale, of a man who feels he has nothing to lose anymore. His mentality is presented quite well through a dialogue with a former comrade, who is in an even worse situation, having to use crutches to walk, who considers himself a burden for everyone around him, with Yeong-ho soon realizing that he is the same for his brother.

Cheol-ho on the other hand, presents another image of hopelessness, that of a man who is not a burden himself, but is being constantly drowned by the "burdens" in his life, which actually include his whole family, who is utterly dependant on him. His toothache actually functions metaphorically for his life, which is also a constant ache he cannot get rid of.

Myeong-sook represents the issues women had to face at the time, where the job opportunities for them were very scarce, and their only hope was to marry a man who would take care of them, in a society where conservatism was the actual law, with women being prohibited from being outside their houses during the night. Her antithesis with Cheol-ho's wife, also serves as an example of the misery associated with all of the characters, as even she, who has achieved some success in her life with the then standards, by being married and giving birth to a child, is in a situation not much better that her sister-in-law, barely having money to feed herself and her daughter.

Through all these characters, Yu Hyun-mok makes a rather pointy remark for both the society and the practices of the then government, who seemed to have very little concern about its citizens, in an era where social welfare was non-existent. Lastly, the character of the mother has a rather ominous presence, as she highlights the consequences the war had on the non-combatants, with her repeated gasping, "let's get out of here" functioning as the film's synopsis regarding the way all the characters feel. 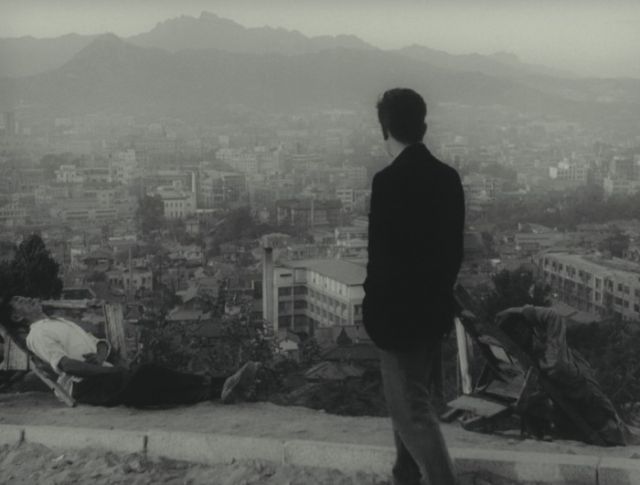 Kim Hak-seong's cinematography is also masterful, with him presenting the hopeless settings the character roam at (both in their house and in various other places that include bars, offices etc) with a combination of artistry and realism, that even includes shots of bullet holes, barbed wire, and bombed areas of Seoul that highlight the fact that the war and its consequences are still here. 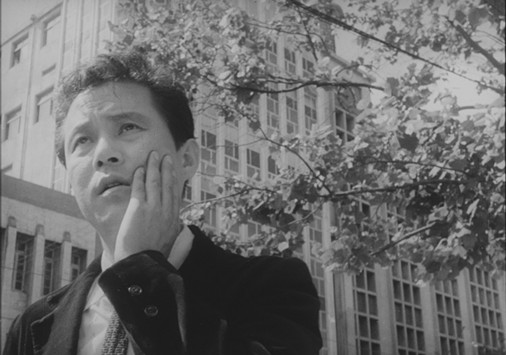 The acting is on a very high-level. Kim Jin-kyu as Cheol-ho portrays greatly a man whose is trapped in a life of pain due to his conscience, with his kindness and caring for the whole of his family being an unsolvable problem. Choi Moo-ryong as Yeong-ho portrays a man who does not seem to get a break, and eventually succumbs to violence due to his hopelessness and his sense of shame for being useless and a burden to his brother. Seo Ae-ja as Myeong-sook is quite convincing.

"The Aimless Bullet" is a true masterpiece, a film one would have to search very hard to find any faults, and a wonderful portrait of the issues post-war Korea had to face, through an approach that could be compared to the one implemented in Greek tragedies.