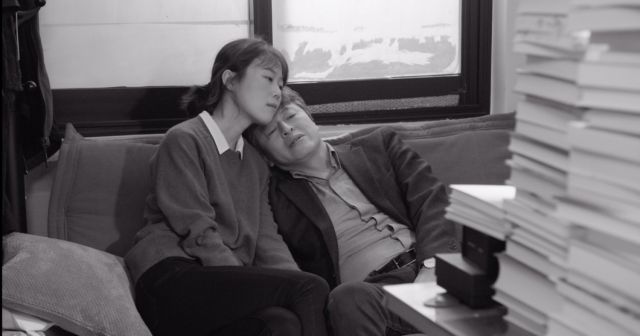 Hong Sang-soo has been, for quite a while now, a favorite of the festival circuit, particularly the ones in Europe, with his art-house aesthetics, his intelligent and occasionally ironic humor, and the drinking that seems to be everywhere in his films, finding much sympathy among film buffs. "The Day After - 2017" continues in this path, for the most part.

"The Day After - 2017" (Festival entry) is screening at London Korean Film Festival that will be on October 26 to November 19.

Kim Bong-wan is the owner of a small publishing house and an unhappily married man, who has been having an affair with his assistant, Chang-sook for some time. Although the woman abandoned him a month ago, his wife Hae-joo, finds about the affair the same day Kim welcomes a new assistant, Ah-reum, a beautiful and intelligent young aspiring writer, who seems to resist Bong-wan's constant charms. However, when an enraged Hae-joo enters the office, Ah-reum finds herself the victim of her rage, and a while later Chang-sook reappears.

Hong Sang-soo directs another minimalistic film, which focuses on witty dialogue to get his comments through, and occasionally functions as a stage play, particularly due to the long takes of people simply talking. The concept of writing, existentialism, and the weakness of man in the face of women are among the centre ones, with the latter holding the protagonist role, through Kim's character, who highlights this weakness almost constantly. 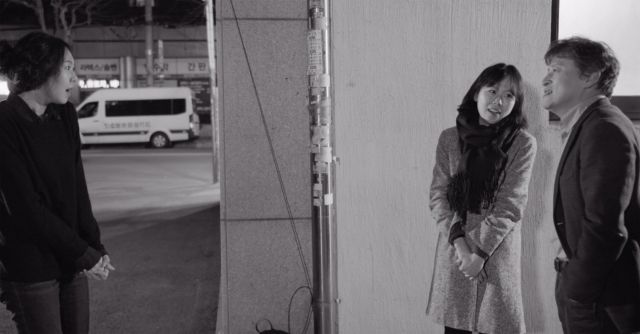 This time though, the humor so characteristic in Hong Sang-soo's films does not appear so much, in an absence that detracts from the sense his works usually leave. His intelligent irony remains, though, as exemplified by the intense, and completely out of place music that appears in the scenes when someone is crying, in a mocking of the Hollywood style which uses music to strengthen weak or even indifferent scenes. The interesting fact about this tactic is that the music theme used, which is actually composed by Hong Sang-soo, is quite good and truly "stays" with the spectator.

I always felt that one has to have indulged into heavy drinking a number of times in his life in order to fully understand Hong's movies. "The Day After - 2017" is not an exception, with him using the consequences of heavy drinking a number of times, particularly regarding the loss of memory, as exemplified in Kim's character, in another element that could be perceived as ironic. Furthermore, the narrative functions as the memories and thoughts of a drunken man, as occasionally the borders between truth and drunken fantasy become invisible.

The framing in the film is exquisite as always, and the trademark,sudden zoom-ins on the face of the character of interest are still here, with Kim Hyung-koo's monochrome camera complementing Hong Sang-soo's style perfectly. Hahm Sung-won's editing gives the film a theatrical sense, as the various long scenes are presented as theatre acts, again with a focus on minimalism. 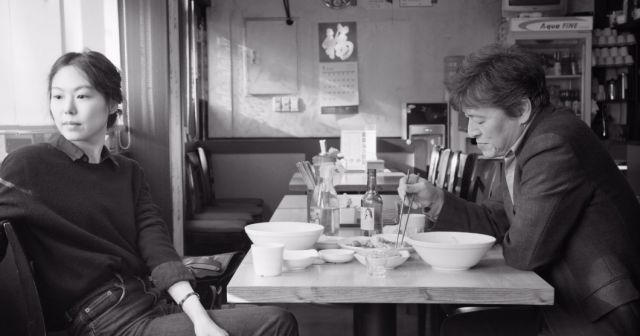 Kwon Hae-hyo as Kim Bong-wan is great as man who exemplifies his weaknesses as evidently as possible, with his behaviour towards his wife and Ah-reum, particularly after Chang-sook reappears, being the apogee of his behaviour. Kim Min-hee is also great as Ah-reum, presenting a very interesting and strong character, who deals with Kim's behaviour and the events surrounding him with the utmost decency. Her monologue about writing and the perception of life, among other topics, is one of the film's highlights. Jo Yoon-hee-I as Kim's wife plays the hysteric woman to perfection, with her fight with Min-hee being another of the movie's most memorable moments.

"The Day After - 2017" is another very interesting work by Hong Sang-soo, which will definitely satisfy the fans of his unique style.

"The Day After - 2017" is directed by Hong Sang-soo and features Kwon Hae-hyo, Kim Min-hee, Kim Sae-byuk and Jo Yoon-hee-I.

"[Guest Film Review] "The Day After - 2017""
by HanCinema is licensed under a Creative Commons Attribution-Share Alike 3.0 Unported License.