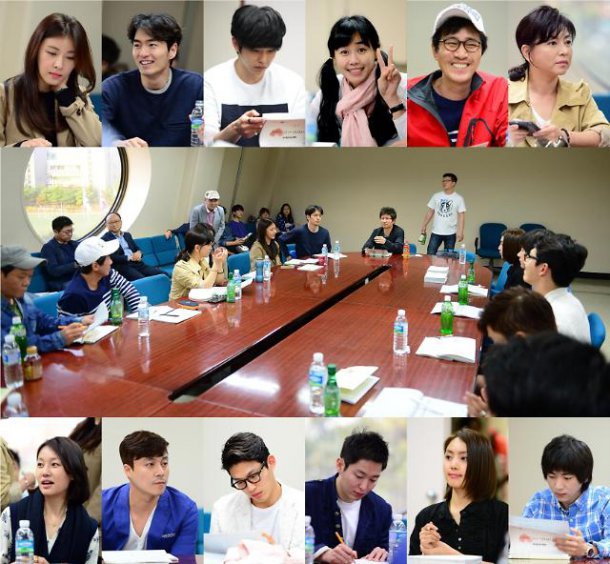 Pictures of the drama "The Time I Loved You" script reading session were revealed.

The reading took place with Ha Ji-won, Lee Jin-wook, Yoon Kyun-sang, Kang Rae-yeon, Jin Kyung, Shin Jung-geun, Seo Joo-hee, Woo Hyun, Choi Dae-chul and others at the Ilsan production center on the 10th for about two hours and a half.

Ha Ji-won appeared in light make up and connected 100% with honest and eager Jang Ha-na, her character in the drama. When Lee Jin-wook (in the role of Choi Won) said, "Hey there's someone I want to take care of", she said, "In cases like this I should punch him". In the scene where Lee Jin-wook is hit by Ha Ji-won, he cried desperately asking her why she was hitting him.

Lee Jin-wook was in comfortable jeans and a T-shirt and he pretended to walk like it said on the script by thumping his feet. When Jang Hee-soo, the mother than abandons him in the drama looked at him with affection, he joked, "I am not supposed to like her so I shouldn't like her in real life too" and hid behind his hands.

SBS weekend drama "The Time I Loved You" is a coming-of-age story about a man and a woman in a longtime friendship, who later find themselves facing difficult times as they turn 30 years old.

The drama is produced by Jo Soo-won from "Pinocchio" and written by Min Hyo-jeong from "Cat on the Roof" and it will be released in mid June.

"Ha Ji-won and Lee Jin-wook's "The Time I Loved You""
by HanCinema is licensed under a Creative Commons Attribution-Share Alike 3.0 Unported License.
Based on a work from this source