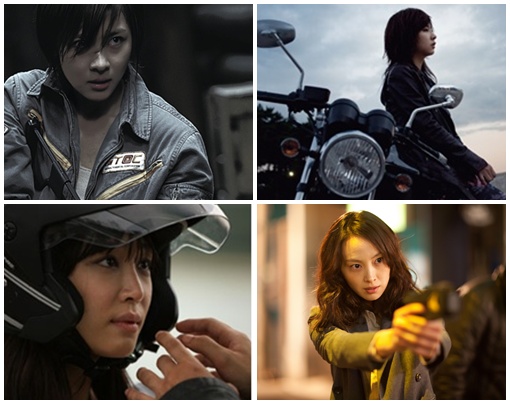 While actresses Ha Ji-won, Kang Ye-won and Shin Se-kyung rode motorcycles in a variety of their productions this year, Lee Na-young is also joining the list.

Lee Na-young took on the role of a detective for the first time of her acting life in the movie "Howling", which is due to be released next year. She got on a bike in attempt to try something new.

This year several actresses like Ha Ji-won from "Sector 7", Kang Ye-won from "Quick" and Shin Se-kyung from "Hindsight" got on motorbikes.

Ha Ji-won rode a motorcycle on an oil drilling barge in the middle of the wide ocean in the 3D action blockbuster movie "Sector 7" and Kang Ye-won acquired a motorbike license as the leading actress in the speedy action blockbuster "Quick".

Shin Se-kyung also got on a motorbike herself to pull off the rough character in the movie, unlike the ladylike and feminine roles she has played so far.

Lee Na-young will be taking on the role of a female detective in the wolf-dog serial murder movie "Howling", in which she will ride a motorbike.

"Ha Ji-won, Shin Se-kyung and Lee Na-young on bikes"
by HanCinema is licensed under a Creative Commons Attribution-Share Alike 3.0 Unported License.
Based on a work from this source