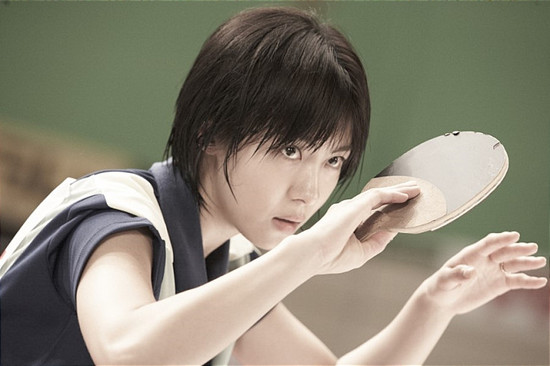 She was a stunt woman in the SBS drama "Secret Garden", she is a war fighting female sergeant in MBC drama "The King 2 Hearts" and in the movie "Korea" she is a member of the national table tennis team. What sport can't she do?

Known for her motor nerves, Ha Ji-won has pulled off all the characters she's done so far involving ones where she had to move a lot.

She managed to pull off the stunt woman act in "Secret Garden" and awed the audience with her action moves in the movie "Sector 7". She proved that she was a multi player in the drama "The King 2 Hearts" with her fancy action moves.

Ha Ji-won has once again transformed into a splendid table tennis player in the movie "As One" which is to come out in May.

For this role, Ha Ji-won was coached by the player herself for three months before the movie started and kept on practicing. With her borne tenacity and effort, she could recreate the images of Hyun Jung-hwa.

Coach Hyun Jung-hwa herself said, "I felt that Ha Ji-won is a real pro indeed watching her for the past few months. There were real table tennis referees on the site sometimes and they asked me how I taught her, that she was just like me. She's worked that hard to make herself me".

"Ha Ji-won, what can't you do?"
by HanCinema is licensed under a Creative Commons Attribution-Share Alike 3.0 Unported License.
Based on a work from this source