Ha Jung-woo explores his dark side 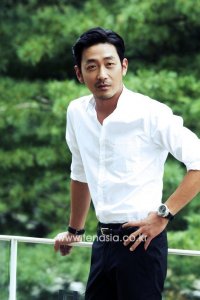 Internationally recognised actor Ha Jung-woo, explores the dark side of humanity through his take on a serial murderer in "Choogyeokja" ("The Chaser", English translation: "pursuer"). He is tracked down by a shady former detective played by Kim Yun-seok. First-time feature film director Na Hong-jin was in charge.

The dark thriller examines society and politics through a story that sees a confessed killer released unpunished while touching upon issues as prostitution and corruption.

HA commanded attention with his role in "The Unforgiven", a film praised at international film festivals. He increased his international appeal opposite of Vera Farmiga in Gina Kim's Never Forever.

"Ha Jung-woo explores his dark side"
by HanCinema is licensed under a Creative Commons Attribution-Share Alike 3.0 Unported License.
Based on a work from this source