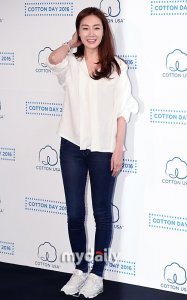 Actress Choi Ji-woo, popular in Japan where she is affectionately called "Ji-woo Hime", (Princess Ji-woo), is coming back to her Korean fans.

She will perform in the MBC drama, "Air City" that will air in May and June, breaking a three-year hiatus.

Her last performance on television was in the SBS drama, "Stairway to Heaven" three years ago, in which she starred with actor kwon Sang-woo.

She will play a heroine, "Han Do-kyong", an aspiring executive at an airport corporation who speaks five foreign languages. The heroine suffers a trauma involving her family.

"We've decided that Choi is appropriate for the role", said HB Entertainment, which is involved in the production.

The story revolves around various incidents at the airport such as drug smuggling and passport counterfeiting.

Actor Lee Jung-jae is a strong candidate to be Choi's counterpart, according to HB Entertainment. Shooting will begin early this year and will be broadcast on weekends on MBC in May and June.

Choi has a large fanbase in Southeast Asia including Japan because she co-starred with actor Bae Yong-joon, better known as "Yonsama" to Japanese fans, in "Winter Sonata" in 2002, which was a smash hit in Asian countries.

Choi also starred in "Everybody has Secrets", acting with Lee Byung-hun. Her roles in "Beautiful Days" (2001), "Winter Sonata" (2002) and "Stairway to Heaven" (2003) boosted her popularity throughout Asia.

"Hallyu Heroine Returns With New Drama"
by HanCinema is licensed under a Creative Commons Attribution-Share Alike 3.0 Unported License.
Based on a work from this source