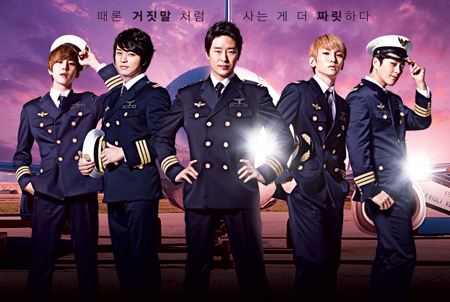 Kim Jeong-hoon, second from left, stars in "Catch Me If You Can" along with other leading stars, from left, Kyuhyun of Super Junior, musical theater veteran Uhm Ki-joon, Key of SHINee and actor Park Kwang-hyun. / Courtesy of M Musical

There is plenty of running away involved in the story of "Catch Me If You Can", the musical based on the 2002 detective-chase film by Steven Spielberg and opening today in Seoul as the first licensed show outside the United States.

As one of the men who does most of the running and dancing during the performance, Kim Jeong-hoon sounded genuinely impressed by his character's lifestyle, especially the panache his character, con artist Frank Abagnale Jr., displays in full glory when dodging the police by assuming several fake identities.

Kim, a former singer with the group U.N. and an actor with a flourishing career here and abroad, even sounded envious at times, though he denied it.

"He's a crook, definitely", he said in an interview Friday, after the rehearsal. "But from a man's perspective, he is a cool cat. His life didn't have a single dull moment. To live that dangerously, you need guts and talent".

And the 32-year-old found those two qualities to make his musical theater debut. He alternates the role of Frank Jr. with musical theater veteran Uhm Ki-joon, actor Park Kwang-hyun and K-pop idols Kyuhyun of Super Junior and Key of SHINee.

"Musical theater was never in my cards", he said, adding that the production team had approached him first months ago. "The rehearsals are long, and I had many other projects running parallel to them".

Since the end of his two-year obligatory military service early last year, he has worked non-stop, releasing an album and starring in a TV series in Japan. He is also signed up for drama productions both in China and Korea this year.

Because of the overlap in schedules, Kim joined the "Catch" rehearsals around two weeks later than the rest of the cast.

"There were times I wanted to run away by myself", he said half-jokingly, "because I was under so much pressure to do well".

He likened the level of desperation after the first run-through to "a student with 15 different tests in a week". Most of this stress, however, seemed self-imposed.

Even with the creative team's compliments, he was not satisfied, he said. He had to do better.

"When I was doing military service, I had so much I wanted to pursue. I'm doing that now", he said, eyes on fire. "I don't even have the desire to date these days".

Other wishes and aspirations will come back once he achieves his goals, he claimed.

"I remember a line from a Japanese film", without citing its title, "that said, 'You can succeed with luck but you cannot fail because of it.' "

And the 32-year-old is betting his fortune on his career wholeheartedly. Like Frank Jr. on stage, Kim sounded as if he did not have a split second to waste, though looking conspicuously - pitifully - tired. There did not seem to be one minute reserved for some rest or even reflection.

The interview ended with him recalling such a moment, once again back on an army base, where time was aplenty. He did not seem 100-percent sure of the meaning, but he recounted the experience with child-like candor.

"I'm not much of a literary person", he said, having instead shown exceptional talent in mathematics and science during his years in school and had been enrolled at Seoul National University before his career in entertainment.

The jolt of inspiration struck one day when he was stationed in Cheorlwon in Gangwon Province, observing a full moon.

"The sun gives its all at all times and will explode in a few billion years, but the moon just reflects that light without having to force it. It's a really smart way of living, isn't it?

"I know it sounds corny now, but at that moment it felt like science and philosophy were meeting at one point".

The musical "Catch Me If You Can" opens today at the Blue Square Samsung Card Hall in Itaewon, central Seoul. It will run through June 10. Visit www.catchmeifyoucan.co.kr for more information.

"Hallyu star Kim leads in new musical"
by HanCinema is licensed under a Creative Commons Attribution-Share Alike 3.0 Unported License.
Based on a work from this source