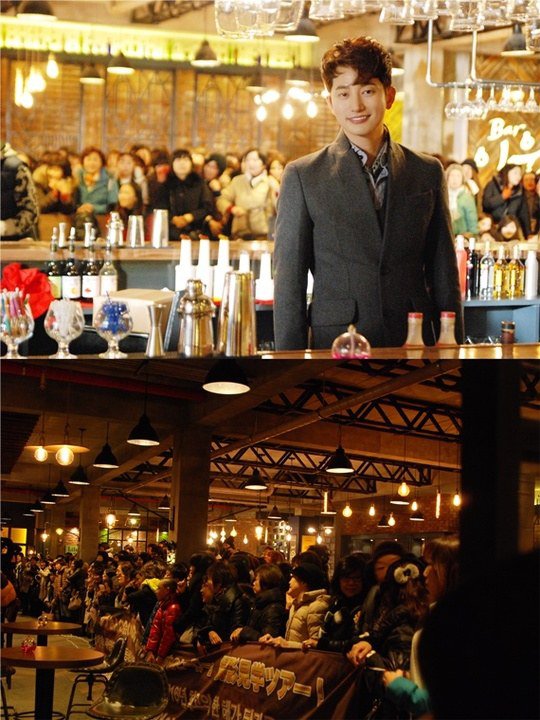 Park Si-hoo completed a set tour with his Japanese fans.

Park Si-hoo is currently in the role of Baek Si-yoon, a former black agent and current bar owner in "Neighborhood Hero" and has been in Macao and Korea in making the new OCN drama.

The actor spent some fun time with Japanese fans who came for a tour of the set in Paju.

More than expected fans participated in the tour and warmed up the set in the freezing cold. They prepared a sign congratulating him of the drama and carried it throughout the tour.

Park Si-hoo met his fans in the 'bar' which is the main background of the drama. When the cameras started rolling, he became Baek Si-yoon and did his best with his fans watching him.

Park Si-hoo smiled at his fans and even took pictures with them in order to show his gratitude for coming from so far away. The fans behaved adequately and made sure their presence didn't interfere with his work.

Park Si-hoo is coming back for the first time in 3 years. He plays a former agent who is a master in martial arts and is expected to show some intense action.

Park Si-hoo's agency claims, "We thank the fans who came from far away to support their beloved actor".

Meanwhile, "Neighborhood Hero" can be seen every Saturday and Sunday at 11PM.

"Hallyu star Park Si-hoo hasn't changed, Japanese fans flock to see him"
by HanCinema is licensed under a Creative Commons Attribution-Share Alike 3.0 Unported License.
Based on a work from this source