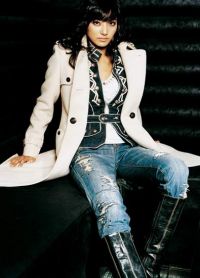 Han's agency BH Entertainment confirmed the actress will play the role of the outgoing president's beautiful daughter, who falls in love with Jang's character.

"Good Morning President" will be a film about three fictional Korean presidents: an old, outgoing president who wins the lottery, a young charismatic president and Korea's first female president. Expectations are running high for the film since Jang will be portraying a youthful president patterned after U.S. President Barack Obama.

A representative for the film's production said that Han was the most suitable actress to convey the beauty, intelligence and dignity of the character.

The film is written and will be directed by Jang Jin, who also wrote "Public Enemy Returns". Filming is expected to begin next month.

Han, who is often called "Korea's Barbie Doll" because of her voluptuous figure and doll-like looks, has appeared in numerous TV dramas such as "Only You"', "Sassy Girl, Chun-hyang" and "Autumn in my Heart". She was also cast in "Soul Mates", a joint Korea-New Zealand horror film directed by Scott Reynolds.

"Han Chae-young Cast in 'Good Morning President'"
by HanCinema is licensed under a Creative Commons Attribution-Share Alike 3.0 Unported License.
Based on a work from this source