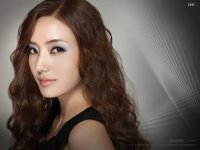 Glamorous actress Han Chae-young is getting ready to work in her first overseas film, " Soul Mate ". She will leave for New Zealand in February to start filming in early March. " Soul Mate " is her first English acting role. Although it will be filmed in New Zealand, it's due for distribution in the U.S., Canada, and other English-speaking regions. Having grown up in America, Han speaks fluent English, which opens up greater opportunities to work in English films.

Earlier in the month, she appeared on today's hottest drama, "Boys over Flowers" as the sister of main character Koo Jun-pyo. Her cameo appearance left an indelible impact on the show, fueling the drama's explosive popularity. Han had refrained from taking part in any other dramas while preparing for her role in " Soul Mate ", but made an exception for "Boys over Flowers", because it's directed by a producer, who also supervised her hit drama, "Sassy Girl, Chun-hyang", in 2004.

Han says she's excited to have such an opportunity to test her acting skills in a broader venue, and hopes to measure up to the high expectations of her fans.