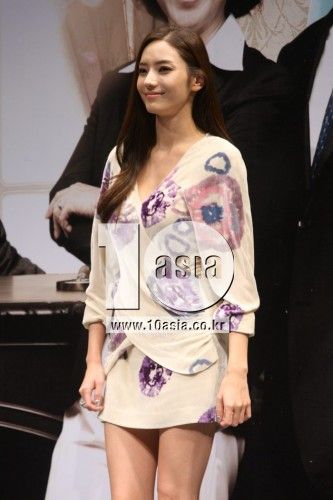 Korean actress Han Chae-young appears to be eyeing for a Hollywood debut, recently meeting with several major Hollywood agencies including CAA (Creative Artists Agency) and William Morris, according to her agency BH Entertainment on Tuesday.

An executive at BH told 10Asia over the phone that the actress, who left for the U.S. earlier this month, had meetings with several agents and producers who had shown interest in the star.

The executive explained that the meetings were "not auditions", as reported by other media outlets, and that they are currently waiting for results from the meetings. Specific projects will be discussed if and after Han and one of the agencies decide to sign a contract.

Born Kim Ji-young, the 29-year-old actress grew up in the suburb of Chicago and speaks fluent English. She was reportedly discovered by a famed Korean comedian during her visit to Korea and put her college plans on hold when he suggested that she try acting.

She made her acting debut in 2000 through horror film "The Record" and shot to stardom throughout Asia with the success of TV series "Sassy Girl, Chun-hyang" (KBS2, 2005).

Last year, she made a special guest appearance in the smash hit drama "Boys over Flowers" (KBS2, 2009) and starred in the film "Good Morning President" alongside top Korean actor Jang Dong-gun.

Han was planning to make her international debut with the film "Soulmate", which was to be co-produced by Korea and New Zealand production companies, until the shootings reportedly got cancelled.

An increasing number of Korean stars have attempted to break into to the U.S. entertainment market over the past few years including actors Lee Byung-hun and Rain who both starred in Hollywood films last year.

Female pop group Wonder Girls also started promoting themselves in the U.S. since last summer and even placed their debut single "Nobody" on the Billboard Hot100 chart. They are currently carrying out a 27-city tour across the country.