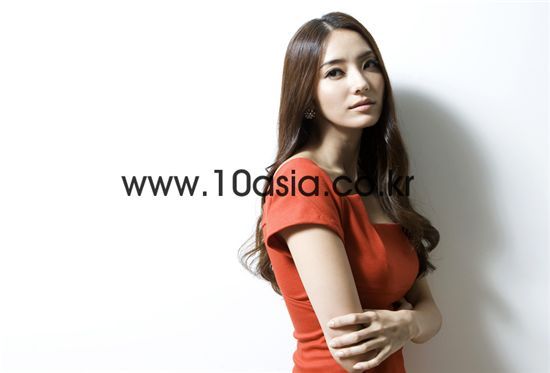 There are many beautiful women in this world. But not everyone is called 'Barbie doll'. After making herself first known through KBS TV series "Autumn in my Heart", Han Chae-young has always been recognized for her unrivaled beauty. Yet at the same time, her 'goddess-like' appearance was also what created a distance between her and the audience.

So could it be that she herself sensed the disharmony that although she has a beauty which people cannot easily take their eyes off, it also makes it hard for people to approach her? Because for a while, Han appeared on the small screen playing roles far from her long-known image. Yet the popularity she gained from playing a lively high school girl in KBS TV series "Sassy Girl, Chun-hyang" or the impassioned acting she showed as an ordinary girl looking for employment in MBC's "Fireworks - 2006" did not help this star descend to the real world. She continued to remain a 'pretty' actress who was suited better for the role of a characters with haughty personalities or from wealthy backgrounds.

That is why her appearance in KBS drama "Boys over Flowers" as Min Seo-hyun, who was the closest in image to the Han Chae-young as perceived by the audience, was all the more refreshing. She learned to fill in whatever was missing rather than throw away what she already has by playing the character who acknowledges her faultlessly beautiful looks yet is kind to everyone as if she was their older sister. And her role as Jin in film "Girlfriends", who had an aura about her yet also a surprisingly cute personality, resembled the real Han the most and was also the role she said she "had the most fun playing". "I'm actually a very ordinary person", Han said, reminiscing on how much fun she had while working with her female co-stars. She then recommended songs which made her overcome with emotion. To think that she too has moments where she becomes filled with emotion. At least that's one commonality we have discovered between her and us.

1. Elvis Costello's soundtrack for film "Notting Hill"
"This, is my song!" Han Chae-young blurted out quite oddly of the song "She" from movie "Notting Hill". But it was only an expression of how much she adores the track. Unlike the typical viewer, Han watched it from a female actress' point-of-view but she said she also heard this song during the most touching moment in her life. "The background music for when I walked the aisle for my wedding was 'She'. I picked it myself. But I heard this song played at some weddings after mine, so I quietly get upset over it from time to time. (laugh)" "She", which reminds the actress both of scenes from the movie and how her heart fluttered at her wedding, has forever become Han's theme song.

2. Beyonce's song from the soundtrack (deluxe edition) for film "Dreamgirls"
Of course, for Han, "Dreamgirls" was a movie she watched "without having a moment to turn an eye away". But she flashed a bright smile saying, "I couldn't quite identify myself with the story though because I haven't been exposed to the dark side of the entertainment business". The song "Listen" in particular, where Beyonce voices her explosive vocals, is Han's favorite song from the album. "The range itself that Beyonce shows when singing the song is extremely moving. I think she looks even greater in my eyes because I'm not a good singer. (laugh) I really liked her recent song 'Honesty' too, even more than the original version sung by Billy Joel".

3. Bang Joon-seok's soundtrack from film "Radio Star"
Han's choice was consistent -- she liked movies where a star played the lead role and the music was impressive. "I hope there will be someone who supports my career as an actress till the very end like they did in "Radio Star"", Han said of the movie where she picked "The Rain and You" sung by main character Choi Gon (played by Park Joong-hoon) as the song which makes her filled with emotion. And the sentimentality she felt for the song was also proof of her hidden taste. "I actually like songs which sound old. You know, songs which are most likely to be sung at contests by college students. It's quite weird since I actually wasn't exposed to such emotions from having spent the 80s and 90s in the United States. By the way! I like Boohwal's songs these days too. They have similar vibes, right? Or am I wrong?"

4. Soundtrack for film "August Rush"
"It's a movie meant to touch viewers' hearts", Han said of "August Rush" which delivered an innocent form of sentimentality to many by weaving the immortal values of art and family into a single story. Oscar-winning composer Hans Zimmer, who was the music consultant for the film, arranged the music appropriately to successfully double the emotion. Han Chae-young's favorite song from the soundtrack "Raise It Up" in particular was nominated for the 80th Academy Awards. "The main character is led into a church upon hearing the song. I liked other songs too but I can't forget the reverent atmosphere 'Raise It Up' created. There was a grandness to it -- like it's the sound of fate. And the harmony the choir created was beautiful too".

5. Brown Eyed Soul's "Soul Free"
Music moves people, even if it is not used in film. And Han got a taste of 'the world's best instrument' through Brown Eyed Soul. "I heard this song one day while driving. But I couldn't stop thinking about it because it was so good. I bought the CD right away. I most definitely listen to the album during the winter in particular". Brown Eyed Soul, composed of some of the most prominent vocalists in the country including Na Ul and Jeong Yeop, is a group who have been loved by many despite having made few public appearances. Han said she used a little help from her husband to keep those songs by her side. "I wanted to move the songs in the CD to my MP3 player but I don't know much about machines. So my husband organized the songs onto my computer. (laugh) My husband always helps with such tasks. It's how he touches my heart in everyday life".

"Han Chae-young's Song Picks"
by HanCinema is licensed under a Creative Commons Attribution-Share Alike 3.0 Unported License.
Based on a work from this source