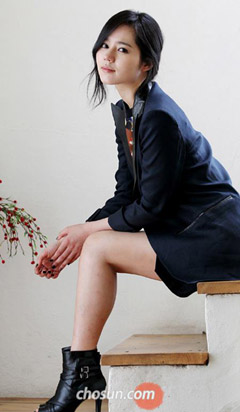 Han Ga-in is at the height of her career as an actress this year as both a TV drama and a film she stars in have become great hits. The MBC drama "The Sun and the Moon", which recently ended, had viewer ratings of over 40 percent, and her new film "Architecture 101" has attracted over 1 million viewers in only eight days since it was released last Thursday.

In both, Han plays someone's first love, and that comes as no surprise since she is one of a rare few actresses who remind every man of his first girlfriend due to her pure and innocent image. In fact, she played the part in her debut film "Once Upon A Time In Highschool" in 2004.

What does she think about the repeated role? "I thought the new movie doesn't drastically deviate from the image I have but would allow me to show some different aspects. The director said he cast me because I fit the image he had in mind but also he felt I could bring something unexpected to the role", Han said.

Asked about how she feels about getting older, she said, "I'm not afraid of aging. It was hard to control my life in my 20s. I happened to be picked as a promotional model for an airline, and I just worked without any goal. I don't remember much about those days. Now I have a goal and think about what I can learn from my work. I was only interested in myself when I was young, but I've come to think about my colleagues more as I grow older".

When she was young, she was frustrated about getting typecast as an innocent woman who reminds every man of his first love. "I couldn't understand why people thought of me in that way. I'm not that feminine or innocent. There are different sides to my personality, but people seem to see just one part", she said. "I'm not very swayed by what people think or say about me and my work. How I'm doing, what I want to do and what my colleagues think is more important than other people's judgment".

Han has no clear plan about what characters she wants to play. "I'm confused about what roles are right for me. I want to show the part of me that I haven't shown, rather than something I don't have", she said. "When I was young, I wanted to be a role model for other people, and to be a respectable and virtuous person. Now I don't see why. Thinking that I am judged by others' standards is frustrating. Why do I have to care about that? Life is short. So instead I think about what I really want to do and why".