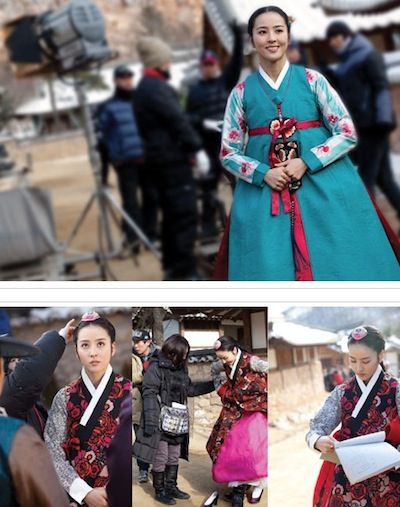 The actress Han Hye-jin looked beautiful in Korean traditional dress or hanbok on the set of TV series "Jejoongwon". Set in the final years of the Chosun Dynasty in the late 19th and the early 20th centuries, the clothes she wears for the drama are not completely traditional in their flamboyant colors and patterns, but they suited the actress to a T.

Han plays a role of the first woman doctor of Western medicine in Korea. Costume is essential for the character, so Han has to get changed at least five times a day during shooting. Although she is happy with the hanbok, she confessed that the clothes could be inconvenient.

"Because I have to wear heavily wired and layered petticoat, it is very uncomfortable every time I go to the toilet. It takes such a long time for just one trip", she said. "Another difficulty is that a lot of the shooting takes place outdoors. But it's still very fun process when you shoot a TV series together with many people and carry the story forward. Because the script is so interesting, I get totally immersed in the story rather than thinking about how hard it is. I'm a bit scared because I'm least confident in historical drama, but I go to work every day in the hope that I'll be able to see that I've made some progress".

Han made her comeback to both TV and cinema early January with "Jejoongwon" and the film "No Mercy", her first starring role on the big screen. "Many people ask me why I hadn't starred in a film after all these years, but I still think it's a huge honor", she said. "There are many talented actors and actresses who are forced to rest for prolonged periods because there aren't many opportunities. I'm very grateful that I was able to do both the TV series and the film at the same time".

Han has been in an open relationship with the singer Naul for five years. "Many people tell me that things get harder when you have a long-term romance, and encourage me to get married soon. But we are so comfortable the way we are now. As I've worked hard in my career, I want to let my boyfriend work as he wishes", she said.