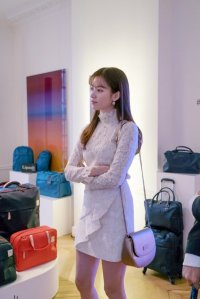 The weekend drama "Shining Inheritance", starring actress Han Hyo-joo, has gained enormous popularity among viewers, recording viewer ratings of 30 percent on May 31. The main character, Ko Eun-sung, who is played by Han, is a woman in her early 20s who stands up against injustice and is determined to get back on her feet against all odds. "Good people like Ko Eun-sung deserve to be happy", said Han, 22, smiling.

We met with Han on June 2 on a rainy day in a cafe in Apgujeong-dong. Han said, "Ko Eun-sung is kindhearted, but not as kindhearted as people think. She is frank but she doesn't hold a grudge against anyone. I hope viewers will receive encouragement from my character, who overcomes all the hardships and gets back on her feet".

Ko Eun-sung came from a once well-off family and studied in the United States, but one day she lost her parents, her autistic brother and all her money. At one point, she wanted to take her life, but thanks to her irrepressible energy she came to her senses and started things anew by delivering milk. Her strong personality was noticed by the CEO of a food company, Ms. Chang (played by Ban Hyo-jung), who announced one day that she would leave all her fortune to Eun-sung to teach her self-indulgent children and grandchildren. But in return, she asked Eun-sung to display her talent at quelling opposition from everyone around.

Han said, "In real life, few people get a chance to inherit a fortune only because of their kindhearted personality. But there's no doubt that there are kindhearted people like Eun-sung in real life. I'm sure there are many of them. That's why I don't think this drama is purely fiction".

Han says she was surprised to learn that her character would receive a fortune from Mr. Chang. "I was surprised to read in the script that Eun-sung agreed to receive the old woman's wealth. I was confused. I asked myself if it's okay to receive so much money like this", said Han, laughing. After agreeing to inherit the wealth, Eun-sung launches a goodwill competition with Ms. Chang's grandson, Hwan (played by Lee Seung-gi), over a restaurant that is on the verge of bankruptcy. But she, Hwan and Jun-se (played by Bae Soo-bin) end up in a love triangle. Han says shyly she is excited and nervous to play the upcoming romantic scenes.

Thanks to Ko Eun-sung's popularity, Han has received a chance to gain popularity after a long slump. She debuted in the 2004 MBC TV sitcom "Nonstop 5" and played a leading role in the 2006 KBS TV2 series "Spring Waltz". She also appeared in "Iljimae" and "By Land and Sky", honing her acting skills. But her presence had remained largely unnoticed over the past five years.

Han said, "To be honest, I've been working hard since my debut but I wanted to make my presence more palpable, and I've been thinking hard about that these days. So far, I never had a chance to rest for more than two months and have had my hands full, but I failed to receive recognition for my acting or rise to stardom for my looks. I was very frustrated for a while and felt the need to set the right course for my life. Right then, I received the script of 'Shining Inheritance'. I have no doubt that my character in this drama will help me change my image. So far, I have played quiet characters who had to be patient and suppress their feelings. But Eun-sung is a character who cried her heart out over her loss in episode one. I saw in her an opportunity to make my wishes come true and mature as an actress".

Han says that in real life she tends to suppress her feelings and anger because she cares about other people's feelings a great deal. She says she used to be very sensitive even in trivial things but since meeting Eun-sung she has become more upbeat. She said, "I want to be healthy both physically and mentally, like Eun-sung is".

Her character has also earned Han popularity from middle-aged women, who regard her as an ideal daughter-in-law. "I'm happy to know that Eun-sung makes viewers cry and laugh", said Han, whose makeup-free appearance in the drama has also revealed the hidden side of her beauty.

Han said, "I think viewers find me pretty because I try hard to show them the most candid side of myself. Before, I acted under the pretense of being someone else, because I lacked confidence. But even a small change can make a person beautiful. I have come to love myself and I am confident in my skills, and that apparently shows".