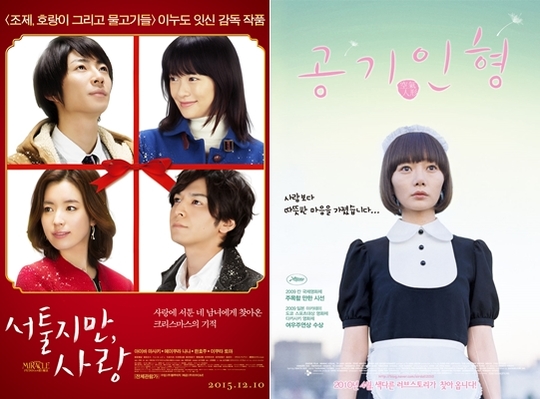 Han Hyo-joo and Bae Doona caught the attention of a Japanese producer.

While the attempts of Korean actors and actresses for foreign markets continue, the masters of movie making in Japan, Inudo Isshin and Koreeda Hirokazu worked with Han Hyo-joo and Bae Doona.

The Hally Wave has been a part of Japanese culture for a while. Not only do singers represent Korea in Japan but actors and actresses have been working with Japanese drama and movie producers too.

First, Bae Doona can be said to be the leading Korean actress in Japanese movies. She starred in a movie called "Air Doll" by Koreeda Hirokazu who is known to blend heartwarming stories into in-depth themes. She played a doll called Nozomi who suddenly starts to feel human emotions.

Koreeda Hirokazu claims he wrote the scenario thinking about Bae Doona and she did a good job in expressing the character of Nozomi. She was acknowledged by being given the Best Actress at a Japanese awards show.

Han Hyo-joo met with Inudo Isshin for the movie, "Clumsy Love" which comes out on the 10th of December. The movie is about coincidental love and mixed feelings of love which one loses but wants back again.

Han Hyo-joo's innocent image got the production to cast her for this movie in which she plays a lighting designer named Tae So-yeon. She speaks in Japanese, Korean and even English in her lines.

Han Hyo-joo's collaboration with Inudo Isshin blended well and she lived up to her name of the 'melo-queen'.

The movie comes out on the 10th of December.

"Han Hyo-joo and Bae Doona steal the heart of Japanese producers"
by HanCinema is licensed under a Creative Commons Attribution-Share Alike 3.0 Unported License.
Based on a work from this source