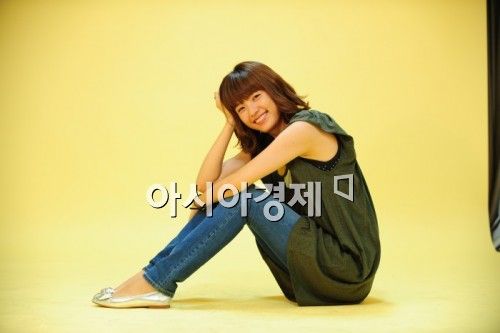 Korean actress Han Hyo-joo has been selected as the festival lady for this year's Grand Mint Festival (GMF2010), to be held in Seoul in October.

Mint Paper, who hosts the event, announced Thursday that they have chosen the 23-year-old actress to be the face of GMF2010, saying her "bright, wholesome image as well as her passion for music clicks with Grand Mint Festival".

The actress, who currently stars in MBC's historical drama "Dong Yi", is known to play the acoustic guitar as a hobby and enjoys listening to various genres of music.

As the festival lady, she will be taking part in the shoots for the official poster and trailer video for the GMF2010. The actress will also be involved in the festival's theme song, which will be a mixed duet.

Han, 23, made her debut through popular sitcom "Nonstop 5" (MBC, 2005) and has since appeared in several dramas and films. She became a household name after starring in the hit TV series "Shining Inheritance" (SBS, 2009), which scored viewership ratings of around 46 percent during its run.

"Han Hyo-joo named festival lady for music fest GMF2010"
by HanCinema is licensed under a Creative Commons Attribution-Share Alike 3.0 Unported License.
Based on a work from this source