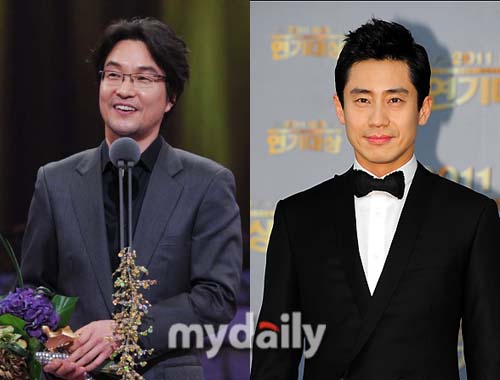 Actors Han Suk-kyu and Shin Ha-kyun had the honor of taking home the SBS and KBS Grand Awards.

Han Suk-kyu was given the Grand Prize for his performance in the SBS drama special, "Deep-rooted Tree" at the 2011 SBS Acting Awards at the SBS Open Hall in Seoul on December 31st, hosted by Ji Sung and Choi Kang-hee.

Known as the best actor in Chungmuro for his movies "Shiri", "Green Fish", "The Contact" and others, Han Suk-kyu returned to TV dramas for the first time in 16 years to take on the role of the 'swearing king', highlighting he dual character of King Sejong/Lee Do.

He is currently starring as the neurosurgeon Lee Kang-hoon in the drama "Brain".

Several actresses and actors from the KBS dramas in the past year attended these events.

"Han Suk-kyu and Shin Ha-kyun win the SBS and KBS Grand Awards"
by HanCinema is licensed under a Creative Commons Attribution-Share Alike 3.0 Unported License.
Based on a work from this source