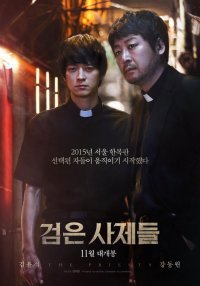 "The Priests" holds up against Mendes' "Spectre"...

Jang Jae-hyeon's murder mystery "The Priests" retained pole position during its second week out having defending the top spot against the incoming "Spectre". Last weekend, "The Priests" (formerly known as "Black Priest") dominated during its first weekend by capturing 62% of the sales, week two for Jang Jae-hyeon's directorial debut saw that slip to 49% with a million tickets sold. The film, which stars Kim Yun-seok and Gang Dong-won, has, since its release on the fifth of this month, grossed over $23.6 million.

The twenty-fourth James Bond film arrived in Korea to 1,105 screens around the country (four less that "The Priests"), and its opening weekend attracted 828 thousand filmgoers to this new Bond adventure. This latest Bond, "Spectre", stars Daniel Craig (his fourth Bond film), Christoph Waltz, and Lea Seydoux, and was produced for around $250 million. Worldwide, "Spectre" has already made $543 million since being released in the UK in October.

One Korea's favourite foreign films of the year, "The Martian", slipped one place to third with 57 thousand admissions (2.4%), bringing its total tally now to 4.8 million, or $33.6 million. A re-release of Michel Gondry "Eternal Sunshine of the Spotless Mind" started its run last week, but has rapidly risen up the chart to fourth place with 47.9 thousand showing their support.

Steven Spielberg's latest thriller "Bridge of Spies" went from fourth to fifth by capturing 2.3% of the box office pie (38.2 thousand admissions), while Yoon Joon-hyeong's own thriller, "Fatal Intuition" (starring Joo Won and Yoo Hae-jin), fell three places to sixth with 31 thousand stubs sold. "Fatal Intuition", along with this week's number one were the only Korea films to feature in this weekend's top ten.

In seventh place entered the animated adventure "Frog Kingdom" by Nelson Shin from Grindstone Entertainment Group
and Simka Entertainment. This Chinese animation was allocated 227 screens from which to pull from, and attracted 23 thousand for just under a percent of the total weekend sales. "The Intern" managed to added another 20.5 thousand to its cause, and so moved to 3.5 million ($24 million), while another Chinese film, "Monster Hunt", entered the fray in eighth with 16.7 thousand admissions. This weekend's top ten was rounded out by "Burnt", which, after winning over 102 thousand filmgoers last weekend, attracted just 16.4 thousand here.