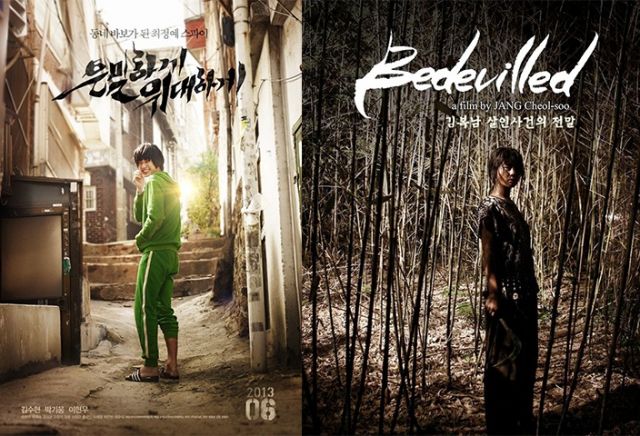 Something strange happened while I was watching Jang Cheol-soo's "Secretly and Greatly"; a stark shift that threw me away from Ryoo-hwan's light-hearted comedy antics, and then dumped me in a rain-slapped realm of abandoned apartments, blood, and bullets. The film had switched genres on me, transformed itself from a lurid and laughable land into a dark and depressing action-orientated abyss.

This re-creation of the world, from a goofy K-comedy to action noir, was not entirely a surprise, and I began to think back to Jang's debut film, the gorgeously grotesque "Bedevilled", and realised that a very similar narrative pattern exists there too. Both films seem to be noticeably split, fractured really, into two distinct halves: two genres, not smoothly mixed, but loosely overlapped and singed on either end.

Generally, when Korean films blend or bend genres together they're relatively seamless, interwoven throughout like quilted moments or, thankfully less frequent, puzzled over like an irregular heartbeat. Jang's (only) two films, however, are like fully functional phantom limbs surgically attached along a single seam: Frankenstein features whose scavenged parts don't share an aesthetic skin or a narrative backbone, but thematic capillaries that thin and taper off the closer you get to the beginning or end.

"Bedevilled" tells the story of a woman (Bok-nam played by Seo Young-hee) who, after years of physical and emotional abuse, violently snaps into a blood-splattering torrent of death. Similarly, "Secretly and Greatly" transforms a North Korean sleeper cell agent (Kim Soo-hyun as Ryoo-hwan), acting as the village idiot, into a hunky and slick major of pain. These characters' transformations are sudden, violent, and all consuming. Bok-nam is passive and subservient before she gets possessed, and Ryoo-hwan (although secretly still acting the agent) doesn't let his cover slip for even a moment before his haircut/transformation.

These shifts (from cruel island melodrama to cringing horror, and hilarious small-town comedy to epic action noir) are fluid passages that are beyond simple character progressions; they are world-changing affairs that divert the entire course of the films, reshaping and challenging how we see their worlds and its inhabitants.

It's not a matter of whether we 'saw' it coming or not (in fact in these cases it's rather obvious), of some twist or bend the film threw at us. Instead, it is like a enchanting magic trick, one where the magician explicitly makes a point to show you each stage of the act by rolling up his sleeves, asking you constantly if that's your card, and trying to prepare you for the unexplainable final moment where he blows our mortal minds.

In "Secretly and Greatly", the film openings with Ryoo-hwan as that skilled and darkly clad weapon of the state, beginning the performance with the very thing we (much) later we will be 'surprised' to see again. Jang then cuts to Ryoo-hwan acting the fool (jumping straight to the eyes with great effect!) and proceeds with this 'new' image of our hero right up until the apocalypse hits/his trip to the barber. Jang has pushed up his sleeves here from the get go, showing us the dark side of his tale before plunging us into the gaudy world of Ryoo-hwan's current existence (he had, in fact, already been living in the South for some time, and so the opening shot was actually a flashback). A seed has been planted here; one that slowly grows without much notice until the heavens break open and a titanic beanstalk has tickled the sky to tears and death.

Bok-nam's predicament is slightly different, but the effect is very similar. Her husband and the villages have been harrying her for years: cheating, beating, berating, and dehumanising her very being. Here, the seed of her outbreak has already been planted; the kettle just is about to start releasing small bubbles from its raging element. But just as with Ryoo-hwan and his unforgiving North Korean commanders, we forget (or at least denial in severity) that we threw seeds out the window, that we left the kettle on high and walked away. This is the key to any magicians illusion, to deceive in plain sight, it is the art of misdirection that distracts and distorts a truth we must admit we knew from the start; but we're powerless to soften its full effect when the conjurer passes around his hat after the show.

They say a watched pot never boils, and how boring would it be if we had to watch Jack watch his beanstalk slowly grow into the behemoth the fairy tale speaks of. We must, like the cook and Jack, look away or sleep, and when we return or wake up the next morning, steam will be rising and a ladder to another hellish world there will be. But we knew the kettle was on, that the seeds were cast, yet still we are awe-struck by the sight of it, of the transformation of things that we knew where there, but dared to be distracted or rest our minds.

The two contrasting worlds Jang attaches are not mere juxtapositions, they needed to be fused somehow, have some life-giving thread stitched deep in and through them. In "Secretly and Greatly", the initial fear of the North's plans intruding at any moment and the pure happiness of Ryoo-hwan's current life is tilted towards optimism. The threat of the activation orders lingers like a sickness that cannot be passively purged, it's a niggle we live with because life is, on the whole, grand. When Ryoo-hwan trims his bangs, that splinter threatens to become crippling, like frostbite that starts with a baby toe and then spreads its deadening influence until it is the majority stakeholder of life itself. This is what happens during the latter half of the film. The days of the comfy green tracksuit are over, and now only a black suit and seriousness may be. But just as Jang holds our hero's duty over us, so then hope of that loving time stubbornly persists as Ryoo-hwan and his sleepy comrades make their final stand-it is the yin we initially ignore in the yang, then the yang when hold onto in the yin. The film ends, like it began, with a memory: a hopeful time crystal to mirror the film's sinister opening scares.

In "Bedevilled" things go from bad to worse, and the film is bookmarked by the fantasy of friendship (with a similar Taoist balancing act). Bok-man is trapped on her island, but dreams of her childhood friend Hae-won (Ji Sung-won) taking her to a new life on the mainland. When this hope is slashed, Bok-nam's dream turns into an eternal nightmare, but the film still concludes on a friendship chord -- albeit now fatalistic plucked. In beginning we hope Hae-won will be Bok-nam's saviour, but when she disappoints, that pipe dream is converted into to prayers for forgiveness and soulful salvation. Hae-win (as Bok-nam's beacon of hope) starts out as a grand lighthouse gleaming across storming waters, but by the time Jang is ready to release us from his spell, it has dwindled to a match-struck flame cupped in the eye of a storm. Again yin and yang are present in Jang's emotive strategy.

"Bedevilled" and "Secretly and Greatly" conclude and progress in very similar ways, their course on the surface appears straightforward and narrow, fooling us into over-simplifying the spectacle and accepting the magician's supernatural dealings and, perhaps, glossing over them as cheap tricks. Bok-man's break from reality and Ryoo-hwan's realisation of it are mark by sudden disruptions, earth-shaking events that morph their film-worlds right before our eyes and, most disturbingly, with our consent and expectations in mind.

Talented and crafty is the director/cine-alchemist who can inform us a storm is coming and still have us spellbound and exposed: to have inverted our hopes and fears so violently and without shame, leaving us to admit that seeing something along the horizon is not the same as touching that source-let alone the new spec we then look back on, the place that we once were, from a time we thought we knew better.

Have you seen Jang's "Bedevilled" and his new film "Secretly and Greatly"? If so, share your thoughts with me and others in the comment section below...