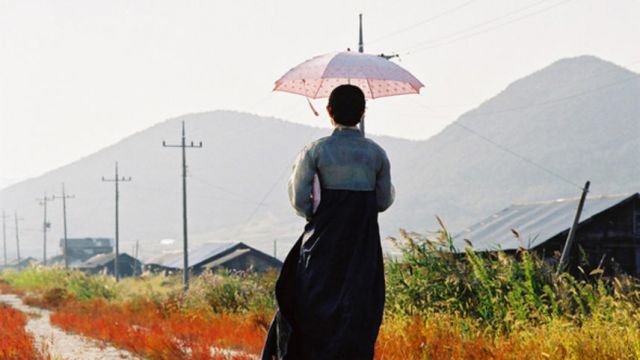 Bae Chang-ho's penultimate film to date was one that he actually wanted to do, after a somewhat failed effort to return to mainstream cinema with "The Last Witness". With him in the protagonist role, and also as a writer-director, Bae Chang-ho had complete artistic command of the production, which ended up being a story that he wanted to tell, in the way he wanted to tell it, and in the distinct style of his second phase of filmmaking, which focused more on realism, through a genuine dramatic approach.

The story takes place two periods, one in the 50s and one in the 70s, both in rural Korea. The story starts at the second, where we watch a 50+ Tae-seok, a traditional blacksmith trying to make a living by attending festivals and selling his hand-made tools, in an age that industrial production has already taken over his profession. Tae-seok is bitter, but as revealed through flashbacks, his bitterness derives from his own past, and particularly his relationship with Deuk-soo, a man he loved so much, he was willing to do anything for him. In this time frame, we watch Tae-seok being poor, but happy, having a loving wife and a best friend. His life however, changes when he decides to put his house as collateral to help his friend raise money to invest into a dyeing fabric entrepreneurship, but he instead gambles and loses all of it. Deuk-soo helps him even then, but the story ends up in violence and him in prison. The true shock comes, however, when he returns from his time in jail. Back in the present, Deuk-soo stumbles upon an epileptic girl named Sin-yeong, and decides to help her, in a series of events that make him face his past.

Bae Chang-ho directs a rather dramatic but also quite personal film. This second aspect derives from Tae-seok's insistence with traditional methods of blacksmithing, in a an era where mass production is the rule, in a tactic that could be easily perceived as Bae's approach towards film, which strayed far away from the popular trends of the new millennium. The man who mocks him in the introductory scene for his handwork, which he considers harder, slower and of less quality than mass-produced steal tools, could be perceived as the attitude Bae had to face from both audience and the industry, with Tae-seok's insistence that the quality of handmade tools cannot be matched, mirroring Bae's approach to film.

Apart from this element though, "Road" is also rather interesting on itself, focusing on what extreme trust to the wrong people, doubt and bitterness can do to a man, as much as the ways one such man can attain catharsis. The anvil and the tools Tae-seok carries are also a nice metaphor for the psychological burden he carries due to the events of the past. The catharsis aspect is eloquently elaborated by Kang Ki-hwa as Sin-yeong, the medium of the concept, with her innocence and failure to deal with the real world being the factors that kick Tae-seok back to reality. Bae Chang-ho also gives a great performance in the protagonist role, presenting a rather different character in the two axes, happy and trusting in the first, and bitter and suspicious in the second, with the same artistry.

Another of Bae's frequent film traits tactics is also present here, of him making political remarks through some small details, which in this case come in the last part of the police precinct scene, when one of the officers says to the girl that her skirt is too short and to Tae-seok that he should get a haircut. This part is a direct reference to the totalitarian tactics of the Park regime.

Visually, the film is exquisite. Despite the fact that it was made with just 500 million won, one ninth of the average budget of Korean movies that reach theaters, the cinematography is impressive, presenting a number of images of extreme beauty, both in the small roads in the middle of the fields and during the winter season. Two scenes in particular, the one with the red-blossomed field with the boat on the background and the funeral one, will stay on the mind of the viewer for quite some time. The editing allows the film to proceed in a relatively fast pace, with the flashbacks adding to that sense, in perfect resonance with the film's aesthetics.

"Road" is a great film that manages to combine an interesting story with social comments, a rather personal approach and impressive visuals.