It's an obstacle that some are not able to overcome in order to appreciate foreign films. A permanent divide that marks a film as 'alien' and not of your own tongue or cultural frame of reference. It's an intrusive necessity that simultaneously invites and imparts difference on one's viewing experience. 'Reading' a foreign film tampers with the message in order to bridge the language barrier that exists between the spectacle and the spectator. But film is a medium made up of two languages, that which is spoken and heard and that which is seen, but it is the experience as a whole that matters most.

Many a time I have chatted to my Korean friends and commented on a great Korean film I had just seen. One of the first things they ask me is "Did you understand it?" That still surprises me because when I ask them in turn if they understand the Western films they've seen they most definitely say they do. To be sure 'reading' a film involves converting the cultural codes of language into another, a process that will forever be riddled with cross-cultural miscommunications. But the stories told in modern film are not simply spoken. There is an abundance of visual potency to cinema that makes it its own language, one that is not as culturally exclusive as the spoken word.

Visual literacy is the common ground here I believe. While what is translated can and does impact on the 'intended' meaning of a film, the viewer also has to synthesis the spoken word with what is actually seen on screen. Modern societies have become increasingly visually literate and with that has come the ability to transcend the spoke word as the ultimate meaning-making language system. Film is primarily a visual language and it should come as no surprize that what is within the frame holds the most value in terms of its understanding.

There are those films that orientate themselves specifically around the spoken word and the cultural from which they came. Films such as Kim Ki-duk's "Spring, Summer, Fall, Winter... And Spring" favour visuals over dialogue and the film can easily be enjoy but locals and foreigners alike. However Kim Jin-young's "Clash of the Families" requires a greater understanding of the Korean language and its different dialects in order to pick up on some of film's humour and cultural significance. Still, whether dialogue is at the forefront of a films message or merely another technical aspect of it, what is portrayed on screen has to take priority as the inherent linchpin of the medium. It is that which one sees on screen, although that may still be culturally flavoured, which allows for cinema to be a truly universal means from which to tell a story. 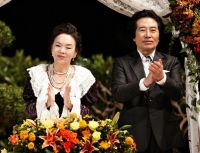 Subtitles allow many people to immerse themselves with another culture while still have the familiarity of visual codes and signs. It serves as a bridge built to allow access to the 'other' and in doing so new meanings are created and shared. While cultural residue will still be evident within the frame (such as the actors/actresses, the locations used, and the socio-cultural context of any given tale) there is the opportunity to glimpse a different culture through a familiar medium without sacrificing the pure enjoyment of being entertained.

So love them or hate, subtitles are our key to sharing our culture and allow others to experience ours through film. Claiming a purist view that the original language is the only 'true' way to enjoy any given film seems highly narrow to me. Meaning will be lost, to be sure, but new meaning will also be created and I see no cause to devalue that as the small written words that are read allow us to understand, feel, and be entertained.

"[HanCinema Korea's Diary] Subtitles: Reading between the Frames "
by HanCinema is licensed under a Creative Commons Attribution-Share Alike 3.0 Unported License.