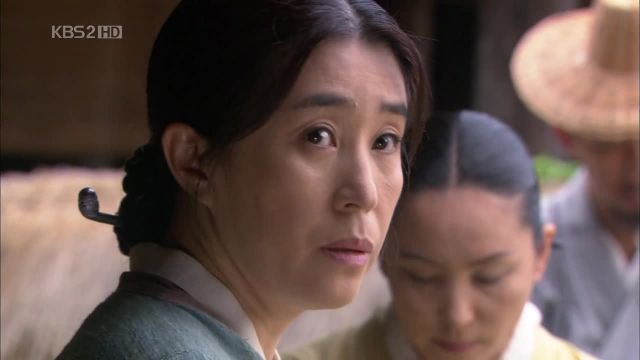 Kim Mi-kyung is an actress who does not need to raise her voice to be noticed. Because of this, she is among one of Korean drama's favored actresses to play mothers and high-powered individuals. She has a powerful screen presence, even in meeker roles. This is in part due to her long career in acting and the confidence that grows throughout the years, and is in part due to her voice.

Kim has acted on the silver screen (starting in 1993) and in the theater (starting in 1985), but the bulk of her work has been in drama (starting in 1999) . Her drama career started at the beginning of Korean drama's rise in popularity in the Asian market during the earliest years of the Hallyu overseas expansion. Since then, Kim has enjoyed increasing popularity and steady work.

One of Kim's unique qualities is that she is rarely screechy, even when her voice is raised. She has a very unique alto voice that radiates power and gives her characters and added dimension, much like James Earl Jones' bass established his career. In dramas like "Tamra, the Island", or "Faith", or "Heaven's Order", she plays important women who are leaders in their community. Her low voice carries without being raised and her excellent diction (which may be attributed to her theater background) give her a unique presence on screen. She is visually and aurally powerful.

Then there is a role such as Park Hee-nam in "The Heirs" where Kim must remain mute for nearly the entirety of the role. It was a surprising choice for an actress who is so verbally powerful, but it provided a real challenge for her. She excelled as the mute mother, making full use of her physical acting vocabulary and of the vocal variation she needed to do so many "thought" voiceovers.

Kim has also taken on roles of mothers and women who are weak such as in "Who Are You - Drama", "Sungkyunkwan Scandal", and "I Hear Your Voice". These women were of low status, or low moral values and a contrast to the more powerful roles Kim tends to play. Kim has a quality about her that makes her noticeable on screen. It gives these weaker characters that she takes on extra gumption. She adds dimension to her characters that are otherwise fairly two dimensional on paper.

It is Kim's ability to adapt and change that has kept her in dramas and entertaining on screen. She can take on the powerful, the weak, and also the humorous. Her role in "Master's Sun" was a combination of a powerful businesswoman, bossy wife, and insecure woman around the strange things her haunted nephew experienced. The juxtaposition between her regal demeanor, commanding voice, and deadpan timing made the role memorable. This role brought out a goofy side to Kim that is not often seen and should be seen more often.

In the future, it would be good for her to take on a romantic role as well as continue her wise choices in roles. She goes for variety in her work and it's only made her excellent acting even better over her fifteen years on the South Korean small screen. But with a romantic role we will see a side of her not often seen when she plays a mother who cares mostly for her children and their situations. In any case, it is not difficult to see why she is a staple of the drama world and will continue to be for years to come.