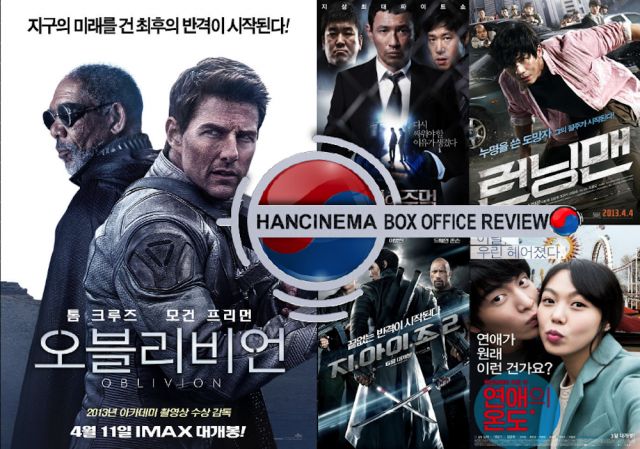 Korea's love for all things Tom Cruise proves itself once again this week as the Hollywood actor's new film "Oblivion" takes the top spot. The film is based off an unpublished graphic novel from the director Joseph Kosinski ("Tron: Legacy") and Arvid Nelson. Mr. Kosiniski said that the film pays homage to the 1970s and the science fiction films of that era. 530,069 (34%) admissions were enough for the film to hold first position over 638 screenings around the country. The film also stars Olga Kurylenko, Andrea Riseborough, Morgan Freeman, Melissa Leo, Zoë Bell, and Nikolaj Coster-Waldau. The sci-fi genre seems to fit Cruise's acting persona well and the thousands of Korean cinephiles that came out over the weekend to see him in action would not disagree.

Despite having more movie screenings (733) than Cruises latest effort, Kang Woo-seok's "Fist of Legend" only managed to enter the chart in second place. "Fist of Legend" claimed 478,888 (31%) admissions in its first weekend and stars Hwang Jung-min, Yu Jun-sang, and Lee Yo-won in a drama based off of the original story "Cartoon World" found on the Korean portal site DAUM. At number three is last week's number one "Running Man" with 252,122 (15%). That pushes Jo Dong-oh's action thriller to a little over the million admissions mark with 1,039,137 total tickets sold. "G.I. Joe 2: Retaliation" fell two places this past weekend, adding just 103,867 (6.5%) to its total tally of 1,784,578. "G.I.Joe 2" stars the Korea actor Lee Byung-hun as 'Storm Shadow' and has been given a fair amount of support in his home country.

At number five is the charming romantic drama "Very Ordinary Couple" by Rok Deok that stars Lee Min-ki and Kim Min-hee. This unique film added 69,005 (4.5%) to bolster its ticket tally to 1,795,791 since its release at the end of March. Yoon Jong-chan's "Paparoti" followed Rok's film, which drop two places to sixth with 39,438 (2.2%) with the help of 211 screenings. The U.S/Norway production "Ploddy The Police Car" rolled in to number seven with 28,972 (1.6%). After electrical cables fall on Ploddy he finds himself with a very new abilities with which he uses to save the Norwegian town of Bodø.

"The New World" takes a tumble from being last week's fifth favourite film to eighth. Park Hoon-jung's film is now in its eighth week and is still pulling in eager fans. "The New World" added 10,689 (0.7%) to bring its total admission count up to 4,670,319 as it comfortably sits as the third highest grossing Korean film of the year so far. O Muel's "Jiseul" managed to enter the top ten two weeks ago but didn't make the cut last week. Now the film re-enter's the top ten with 10,405 (0.6%) admissions despite having the lowest amount of screenings of all the films in top ten this week. "Jiseul" now pushes on to 110,003 total admissions. Lastly, the French film "Léon" (aka "Léon: The Professional") makes up this week's most popular films, creeping into tenth with 9,160 (0.6%). "Léon" was originally released back in 1994 but has since returned with the help of 75 avid screenings around Korea.