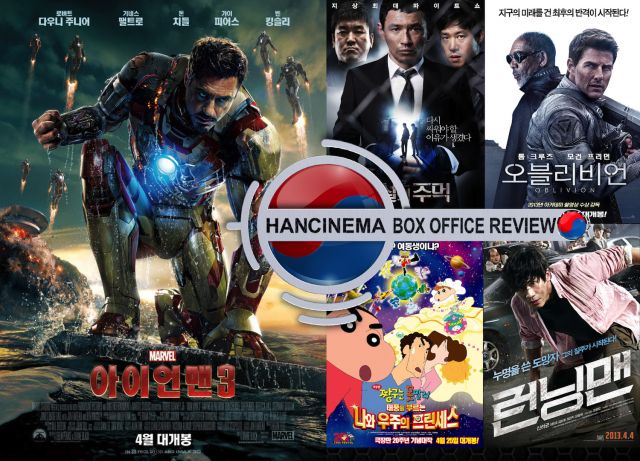 Marvel's "Iron Man 3" has jolted Korean cinephiles into action after a lethargic month at the movies. The popular comic book franchise opened with 2,202,252 admissions, taking in more than 80% of all tickets sold over the weekend. That's more than the combined admissions count of the top films in the last four weeks! It was also given a fair bit of support from the cinema houses, opening to an incredible 1,380 screenings around the country ("The Berlin File" was only other film this year to enjoy such a release, and it opened with just 894). It's an impressive response from both the industry and the Korean public, but such a top-heavy weekend resulted in a dismal performance by everyone else in the chart.

In second place was Kang Woo-seok's "Fist of Legend" with just 143, 754 (4.9%). "Fist of Legend" retained its second place in the chart, but was sucked dry in the face of Marvel's much-anticipated blockbuster. Kang's film had 426 screenings around the country and this past weekend's additions brings the film up to 1,543,066 total admissions. Last week's top film "Oblivion" was beaten down to third with a just 77,109 (2.6%), the film has been the top film for the past Two Weeks but has already been shown up by its Hollywood counterpart. "Oblivion" now sits atop an admissions stack 1,416,412 high. Two new Japanese animations made it into the top ten this week, the first of which was Sôichi Masui's "Crayon Shin-chan: Arashi o Yobu! Ora to Uchu no Princess" which managed to take in 74,280 (2.2%) admissions.

Jo Dong-oh's "Running Man" came in third last week, but slipped away from the pack over the past week. Jo's action thriller pulled in 38,995 (1.2%) admissions, bringing its total tally to 1,377,261 since its release early in April. The classic tale of "Pinocchio" returns in the form of transnational effort by Mexico, Belgium, France and Luxemnbourg. "Pinocchio" started its run in Korea with 32,814 (0.98%) admissions over 283 screenings. The U.K drama "Song for You" fell two places from last weekend, adding just 24,553 (0.8%) to its efforts here in Korea.

Into the tail we go and in eighth we find the second Japanese animation to make the cut in "Neon Genesis Evangelion: Q" with 23,331 (0.78%) to its name. Last week's number six "To Rome With Love" by Woody Allen followed that. Taking the biggest tumble of the week was Choi Seung-ho's "Norigae", scrapping together a mere 14,242 (0.48%) and falling six places from its entry position last weekend of fourth. "Norigae" may be headed for the exit after claiming just 158,018 admissions in Two Weeks.