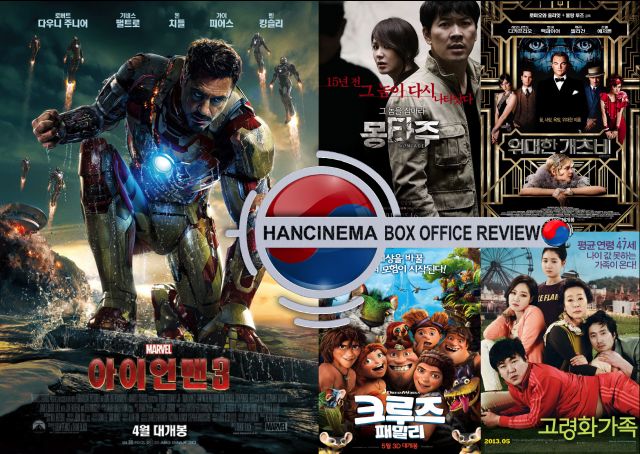 It was a tightly contested tango and the top this past weekend, but it was once again "Iron Man 3" that came out on top. Marvel's blockbuster took first with 696,310 (27%), which moves its total admissions count in Korea to just under 8.5M. Tony Stark's latest adventure was almost toppled though, with both Jeong Geun-seop's "Montage" and Baz Luhrmann's "The Great Gatsby" cracking more than 500,000 admissions in their first weekend. In addition to these two new entries, Jeong Ik-hwan comedy drama "Happiness for Sale" and Ken Loach's "The Angels' Share" also made their way into Korean cinemas.

The second most popular film was a new entry by Korean director Jeong Geun-seop. Jeong directed and wrote the screenplay for "Montage", which stars Uhm Jung-hwa ("Dancing Queen"), Kim Sang-kyung ("The Tower"), and Song Young-chang ("Doomsday Book"). The film tells of detective with a guilty conscious trying to help a mother who child was kidnapped 15 years earlier before the statue of limitations expires. Jeong's promising debut claimed 556, 161(21%) admissions and was followed by Baz Luhrmann's remake of "The Great Gatsby". "The Great Gatsby" is based off of F. Scott Fitzgerald's 1925 novel of the same name. The film stars Leonardo DiCaprio, Tobey Maguire and Carey Mulligan in opulent modern telling of Jay Gatsby; a young and mysterious millionaire who lives an extravagant lifestyle at the height of the Roaring Twenties. Luhrman's film opened its Korean account with 525, 255 (20.8%) admissions. "The Croods" managed to hold onto fourth despite the new entries piling up around it. The DreamWorks' film got a lot more attention this past week, claiming 305,467 (11.5) as opposed to the 53,000 it attracted last week.

Song Hae-seong's "Boomerang Family" fell victim to all the new films and hype and fell from second to fifth. Last week the film claimed a hearty 442,054, but only managed 241,899 (9.3%) over the weekend. That moves Song's family flick to just under the million admissions mark (986,516). "Happiness for Sale" marks another Korean debut, this one by Jeong Ik-hwan. After the death of her father, Min-an (Choi Kang-hee) considers selling the small stationary store he leaves her. However, the community that supports it gives her something to think about as she contemplates the memory left to her. The film opened with 180,705 (6.5%), and has amassed over 200,000 since its release late last week. "The Singing Contest" took a serous tumble, free falling from third to seventh. This comedy drama added just 58,390 (compared to the 174,048 it saw last week) to creep up to just under the million mark.

We're into the bottom of Korea's favourite films now, and we start off with the U.K/Ireland coproduction "The Angels' Share". "The Angels' Share" is a comedy-drama that follows a Glaswegian father seeking to turn over a new leaf in his life with the help of a few friends. Glasgow may be some distance from Korea, but that didn't stop 3,453 keen moviegoers from attending its first week out in Korea. The Japanese animation "Crayon Shin-Chan: Arasi Oyobu Ora To Uchi No Princess" is down three places, claiming only 2,795 in its fourth week out on circuit. Lastly, the French production "Rust and Bones" added 2,501 ticket stubs to advance its total tally to 25, 667.