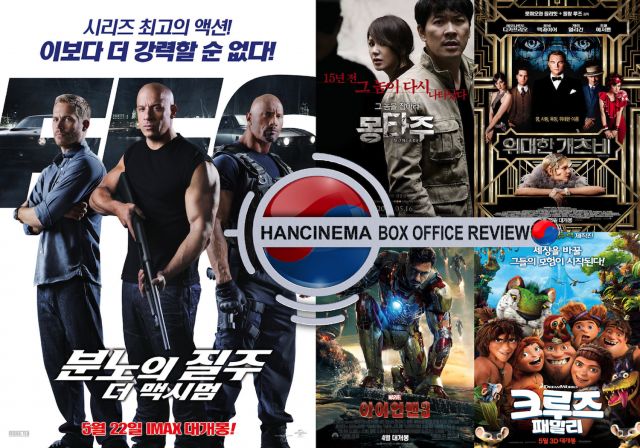 The sixth instalment of the "The Fast and the Furious" series has raced to the top of the chart in its first weekend out. "The Fast and the Furious 6" snatched 625,056 (34%) stubs to deny "Iron Man 3" a fifth straight month at the top of the pile.  Both Jeong Geun-seop's "Montage" and Baz Luhrmann's "The Great Gatsby" kept their good form going, holding down second and third respectfully. The admissions were a lot more evenly spread this past weekend, and only a handful of new entries managed to disrupt proceedings.

Jeong Geun-seop's "Montage" has been the Korean film of choice for the past two weeks. The film add 452,488 (23.5%) admissions to brings its total count up to 1,387,867. "Montage" had the unfortunate luck of directly competing with Marvel's "Iron Man 3", which has now tagged the "Fast and the Furious" to take over at the helm as foreign flicks continue to dominated the top spot. As with last week, "Montage" was once again followed by "The Great Gatsby", only this time the gap wasn't as close. Last week "The Great Gatsby" claimed 525,253, but managed just 232,693 (12.4%) this time around. This is the second week for Luhrmann's remake, during which it has accumulated just over a million admissions from Korean audiences. After four week's at the top, Marvel's "Iron Man 3" falls three places to find itself at number four. Last weekend the Hollywood blockbuster claimed 696,302 tickets, but only pulled in some 217,244 (11%) this time around. Still, I wouldn't feel to bad for Mr. Stark just yet,  as "Iron Man 3" is currently the second highest grossing film released in Korea for the year, and is sitting on a cool 8,819,030 admissions.

Kirk DeMicco and Chris Sanders are the team of directors behind the latest DreamWorks Animation film "The Croods"; which slipped one place from last week's fourth. "The Croods" celebrated its second weekend out in Korea with 140,022 (6.9%), bring its total tally in Korea to 556,854. At number six we find Song Hae-seong's "Boomerang Family" with 51,529 (2.6%), that moves this touching family drama to just over the million admissions mark in three weeks. Star Trek fans in Korea seem to be lacking as the latest in the series, "Star Trek Into Darkness", enters the charts at number seven and with a modest 48,527 (2.7%). J. J. Abrams is the man behind this one, doing so on the tight budget of $190M. Still, "Star Trek Into the Darkness'" bottom line is looking good and has already made $248M in sales at the box office internationally.

Jeong Ik-hwan's "Happiness for Sale" fell two places in light of the re-shuffle going on above it. Its progress has been slow and it only managed to sell 44,722 admissions, putting Jeong's debut film on a total tally of 302,282. At nine is Richard Linklater's "Before Midnight", a sequel to "Before Sunrise" (1995) and "Before Sunset" (2004). The film claimed the attention of 44,184 Korean cinephiles during its first weekend out in Korea. Lastly, Lee Jong-pil's "Born to Sing" slots into tenth with 10,148 of its own. "Born to Sing" came into the charts while "Iron Man 3" was hitting its stride, that was four weeks ago and now the film finds itself just shy of the million admissions mark with 957, 660 (0.4%).