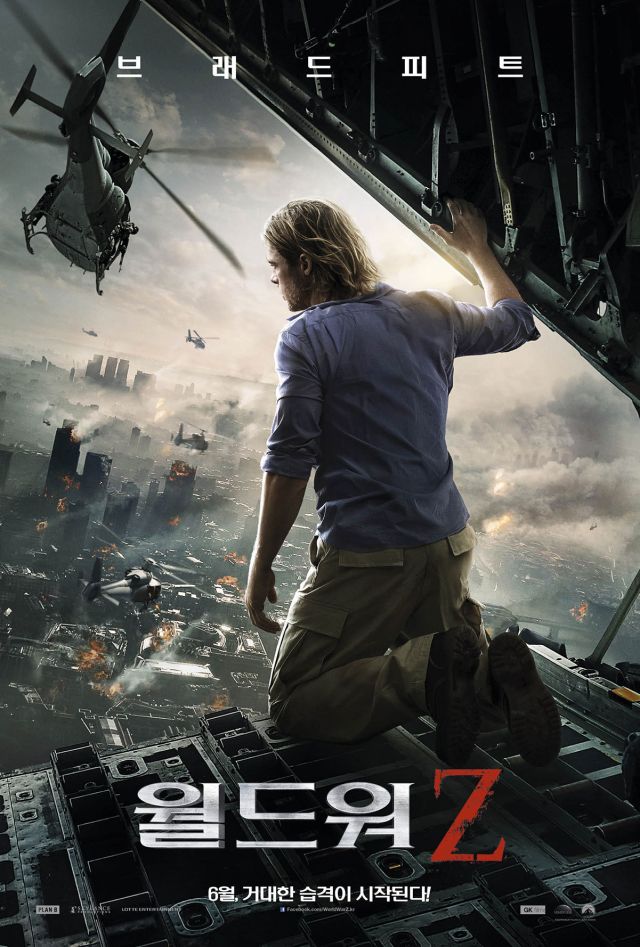 Jang Cheol-soo's "Secretly and Greatly" gets denied a third week at the top courtesy of the Hollywood adaptation "World War Z". The rights to Max Brooks' post-apocalyptic horror were claimed in 2007 by Brad Pitt's own Plan B Entertainment, and tells the tale of a retired UN employee (Pitt's character Gerry Lane) who travels the world in order to stop the zombie pandemic. The film opened in Korea with 1,303,675 (55.56%) admissions, nudging the star-studded "Secretly and Greatly" down one place with 504,997 (20.32%).

Jang Cheol-soo made his debut in 2010 with psychological horror "Bedevilled", a brutally graphic revenge flick that earned him a number of local awards, including four Best New Directors titles. Three years later and Jang emerges with "Secretly and Greatly", an action comedy with a number of popular faces that seemed destined for success. In addition to its star power cast of Kim Soo-hyun, Park Ki-woong, and Lee Hyun-woo, the film also drew interest from the 40 million hits the original webcomic ("Covertness" by webtoonist Hun) attracted online. Jang's feature came into the top ten early in June, amassing an impressive 2M admissions with nearly 70% of the market share. Since then it has moved its total tally to 6,176,193 and has overtaken "New World" as the third highest grossing Korean film of 2013.

Last week it was a close contest at the top, with "Secretly and Greatly" and "Man of Steel" slugging it out for dominance. "Man of Steel" claimed over a million admissions last weekend with the help of 998 screenings around the country. This weekend the film had to settle for 347,278 (15.3%) over just 610 screens. Zack Snyder's tale of DC's iconic superhero was produced on a budget of $225M, and thus far the film has claimed $12.8M from Korean audiences.

With the top three films snatching little over 90% of market share the rest were left scratching their heads somewhat. "Star Trek Into Darkness" held third last weekend with 97,183, but its fourth week saw it slide to seventh with 30,751. The latest in the popular sci-fi series opened its Korean account with 507,559 the first weekend of June, taking over the crown from the "Fast and the Furious 6" which took gold the week before. However the film has slipped steadily since and floated down the ranks as more exciting local and international flavours hit the theatres.

The American thriller "The Call" (directed by Brad Anderson and starring Halle Berry) and the Danish animation "The Great Bear" (2011) opened up their accounts at fourth and fifth, and failed to make 70,000 between them. The DreamWorks animation "The Croods" has been around for seven weeks now, mopping up admissions in the shadows of the blockbusters. With the help of its weekend haul of 25,260 (0.9%) "The Croods" now has close to 900,00 for its patience and persistence. Richard Linklater's "Before Midnight" held onto tenth with a bleak 6,417, moving its admissions to 176,461 in its five weeks out in Korea. "Before Midnight" was eject from the top ten in its second week, but bounced back to remain in the top since ever since.

Two new Korean films came into the spotlight last week. The first was Kim Seong-hong's "Doctor" starring Kim Chang-wan and Bae So-eun. This is the second film by Kim; his first was in 2009 with "Missing" which claimed 651,508 admissions. "Doctor" ended its first weekend with 45,135 ticket stubs in the bank, 32,389 (1.38%) of which came directly from the weekend crowds. The other new Korean entry was Kwon Yeong-rak's crack at the summer horror crowd with "A Puppet". This directorial debut film settled itself at number nine with 15,443 admissions and stars Lee Jong-soo and Koo Ji-sung.