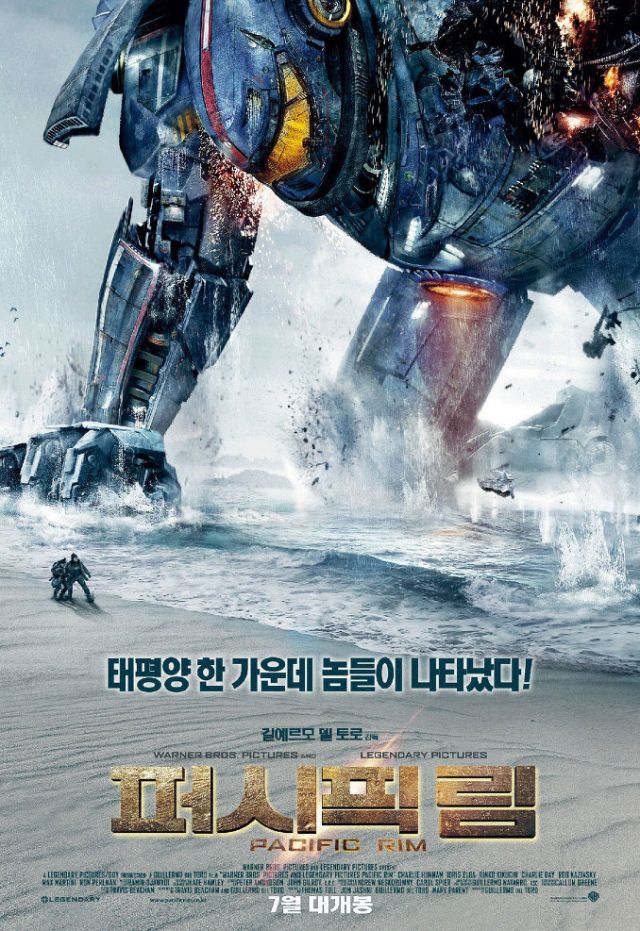 The American sci-fi flick "Pacific Rim" came to the party last week and, despite being outdone somewhat back home, the film managed to narrowly clinch the top spot during its first weekend out in Korea. Last week it was Cho Ui-seok and Kim Byeong-seo's "Cold Eyes" that stood tall, but the local crime drama found itself around 160,000 admissions short of del Toro's epic robotic rodeo. "Cold Eyes" claimed 1M admissions (36%) over this past weekend, but the $190 million U.S. production "Pacific Rim" managed a few better with 1.16M admissions (44%).

Korea's affinity for large weapons-yielding robots almost ensured the success of this futuristic extravaganza, but the margin was slim and it remains to be seen just how much staying power "Pacific Rim" will actually have in the Korean market. Previous robot-featuring hits like "Iron Man 3" (9M) and "Transformers 3" (7.7M) performed especially well in Korea, so one can understand why distributors and cinema houses are staking the film over 1,000 screenings around the country. The only other two films to receive such exposure was Jang Cheol-soo's latest film "Secretly and Greatly" and Marvel's "Iron Man 3", both of which enjoyed an opening weekend that pulled in more than 2M admissions.

Again it was another top-heavy race at the box office. Last week the top three films carried 82% of the total ticket sales. Here that figure jumped to 90.5% as competition remains relatively low building up to some of the bigger local films coming out in the next few weeks. In third was "World War Z" which added 345,896 (11.6%), advancing its total to 4.8M since its release late last month, making it the fifth highest grossing film released in Korea this year (it's passed "New World" which sits on 4.6M).

Kim Yong-gyun's "Killer Toon" remains in fourth with 107,173 (3.5%) and now sits on an admissions stack 1M high. Yong-gyoon's horror held this same position last week, but with 86,000 more sales going its way. "Killer Toon" entered the charts when "World War Z" was reigning; it never came close to claiming first and has remained in the top five since. How the past few weeks have shown that only the top three films are having any real impact so unfortunately Kim Yong-gyun's "Killer Toon" has been stuck on the wrong side of this ticketing watershed. As with last week the only other Korean film in the top ten is Jang Cheol-soo "Secretly and Greatly". This past weekend the film added another drop of 34,319 (1%) admissions to its six week bottom line of 6.9M. "Secretly and Greatly" is sitting comfortably as the third highest grossing Korean film of the year, just behind "The Berlin File" (71M) and "Miracle in Cell No.7" (12.8M).