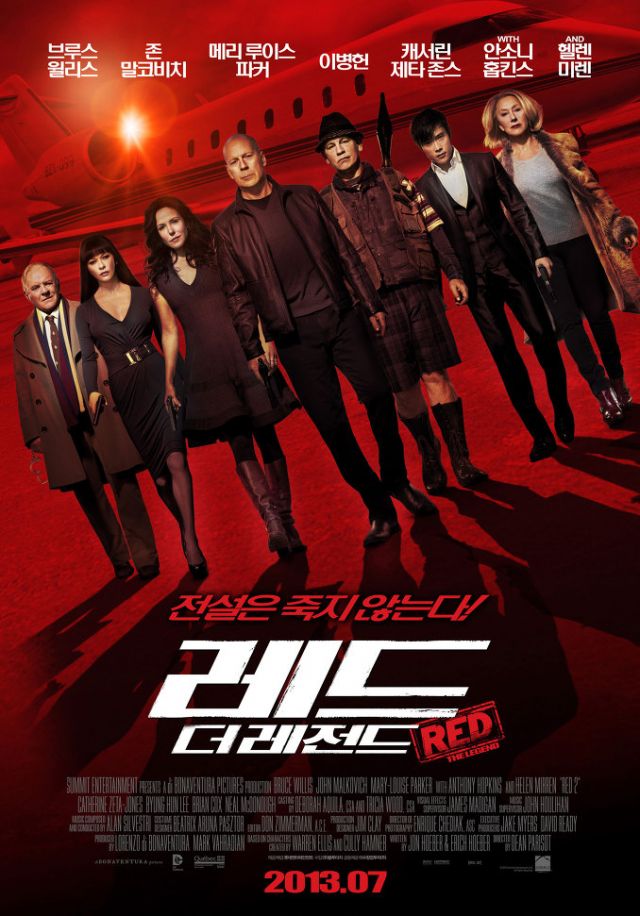 "The Best Never Rest" is the slogan for this week's number one film "RED 2", a sequel to the popular 2010 action comedy. Director Dean Parisot's film claimed the lion's share of the ticket sales over the weekend (832,276), but, unlike previous weeks this month, the admissions were a little more evenly distributed. Last week Kim Yong-hwa's "Mr. Go" was released and, despite a slow start for Korea's first stereoscopic 3D effort, the film eventually managed over 500,000 admissions (19.8%). "Mr. Go" came close to sneaking past Cho Ui-seok and Kim Byeong-seo's "Cold Eyes" (21.3% with 576, 360 admissions) in second, an effort that would've forced "Cold Eyes" to step back from the position it fought so hard for last weekend.

It was clear that Ling Ling (the circus-trained Gorilla in "Mr. Go") was expected to put on better showing that it did. Kim Yong-hwa directed the popular 2006 romantic comedy "200 Pounds Beauty", and his last film was "Take Off" five years ago. The film received a lot of publicity and opened with the most screenings of all the films on circuit (788), however it was not able to capitalise and will now hope to gain some form of momentum next week before the highly anticipated "Snowpiercer" and "Terror Live" enter the game.

"Kim Byeong-seo's "Cold Eyes" entered the chart on the third of this month and opened in first with 1.3M admissions. Last week it was nudged down to second by the action extravaganza "Pacific Rim", but again it still managed to break the million admissions mark. In week three "Cold Eyes" has moved on to 4,574,900 admissions and is still able to capture 20% of moviegoers. It's now in striking distance of Park Hoon-jung's "The New World" (4,682,418) for fourth in the list of Korea's highest grossing films of 2013.

The horror/thriller "Killer Toon" added just 32,334 to bring its four-week tally to a meek 1.1M admissions. This is Kim Yong-gyun's fourth film, he previous works include "Wanee and Junah", "Red Shoes", and "The Sword with No Name". The only other Korean feature to make it into the top ten was Jang Cheol-soo's "Secretly and Greatly". Jang Cheol-soo well known for his first film, the popular 2009 revenge thriller "Bedevilled". "Secretly and Greatly" is surprisingly nothing like Jang's previous (at least thematically), taking a must more commercial route supported by some high-profile faces. The film's total ticket tally now stands and 6,950,762. That's now just 215,000 short of passing "The Berlin File" as Korea's second highest grossing film of the year. It's been a success seven week's now in the top ten for "Secretly an Greatly", but this last weekend saw it claim just 4,139 tickets along with tenth place.

On the foreign front "Pacific Rim" seems to be just a flash feature at the top. The big budget action sci-fi claimed first last week with 1.1M admissions, however this weekend mankind's' robotic fight was experience by just over a third of those opening weekend figures. "World War Z" is proving a little more resilient during this trying time at the box office, slipping just to fifth with 115,378. This post-apocalyptic zombie flick has now claimed 5.1M admissions in Korea. Lastly just a note on the animation "The Croods". The film has finally been ejected from the top ten after a persistent ten-week run! Sadly though, during that time the film was unable to breach to the million admissions mark.