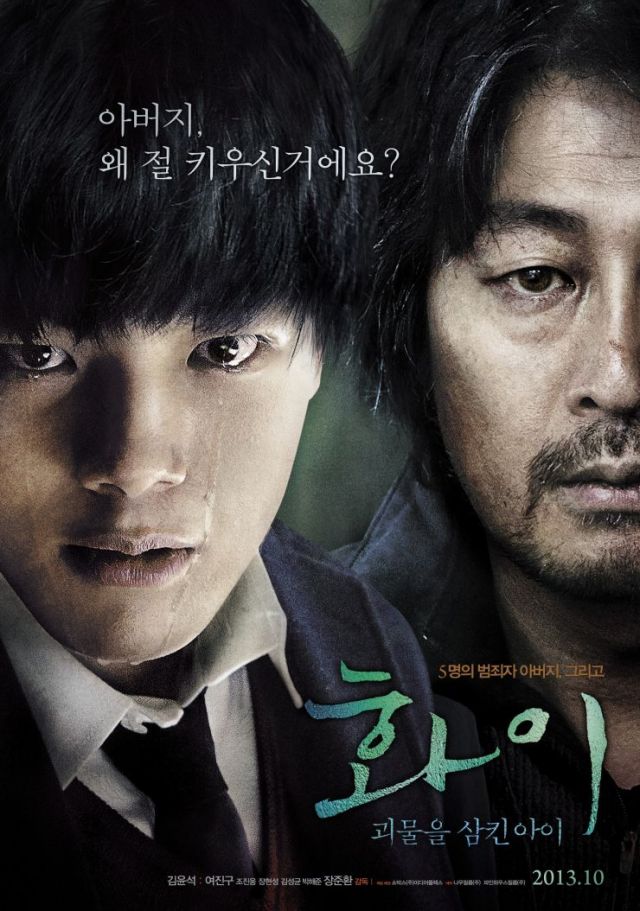 Jang Joon-hwan's  "Hwayi : A Monster Boy" opened strong at a peaceful box office this past weekend. Jang, who is best known for his multifaceted debut "Save the Green Planet", has been out of the cinematic limelight for some time now and found his comeback well-supported with 719,454 (45%) admissions in weekend one. Last week's number one, Lee Joon-ik's "Hope", subsequently bowed out into second place with 444,591 (25.5%), followed by "Tough as Iron" (133,250 – 7.7%) and "The Face Reader" (120,126 – 7%). These local flavours dominated the upper echelons of the chart and together constituted 85.9% of the total ticket sales, leaving a string of foreign films to scrap it out for those remaining stubs.

In 2003 Jang came out with "Save the Green Planet", a zany and sophisticated event that became a huge hit on the festival circuit and with Korean cinephiles. Since then Jang has been scarce, only involving himself in a couple short films/segments including a chapter in the 2010 omnibus film "Camellia". Now this exciting film talent has returned with a new, if perhaps more commercially viable, action crime thriller that, since its release on the 9th, has sold 1,213,924 ($8.5M) tickets across Korea. "Hwayi" stars Kim Yun-seok and Yeo Jin-goo who play out an unusual and sinful father-son relationship against the backdrop of the Korea's criminal underworld.

Lee Joon-ik's "Hope" fell to second despite only dropping roughly 40,000 admissions from last weekend's gold-winning count. "Hope" claimed 444,591 over 650 screens and with that sum managed to advance its total ticket tally to 1.7 million. This is the eighth film by director Lee Joon-ik whose filmography shows a firm preferences for historical features ("Battlefield Heroes", "Blades of Blood", "Hwangsanbul", and, most notably, "The King and the Clown"). However "Hope" is family melodrama that showcases one dedicated father who, after his daughter becomes a victim of physical violence, tries to piece his family back together again. Sol Kyung-gu takes the led in this one, a man in demand who is enjoying a very busy 2013. Already Seol has led the way in Lee Seung-joon-I's "The Spy" (3.4 million admissions), Cho Ui-seok and Kim Byeong-seo's "Cold Eyes" (5.4 million), and his third major release of the year has just surpassed the million admissions mark.

Last week's number two "Tough as Iron" was bumped down one place with 133,250, closely followed by the period drama "The Face Reader". "Tough as Iron" is Ahn Kwon-tae's third feature film; both his previous efforts ("My Brother" and "Eye for an Eye") claimed a little over 2 million admissions and his new feature has just moved onto 1.1 million in its second week out. Han Jae-rim's "The Face Reader" added another 120,126 stubs to its cause, that's over 9 million admissions now for Han Jae-rim's well-timed masterpiece. Han's popular period piece is currently the tenth highest grossing Korean film of all time and has amassed a total of $60.8 million during its five-week spell. "The Face Reader" will still, however, have to summon a few more stubs if it wishes to challenge Bong Joon-ho's sci-fi epic "Snowpiercer" (9.3M)