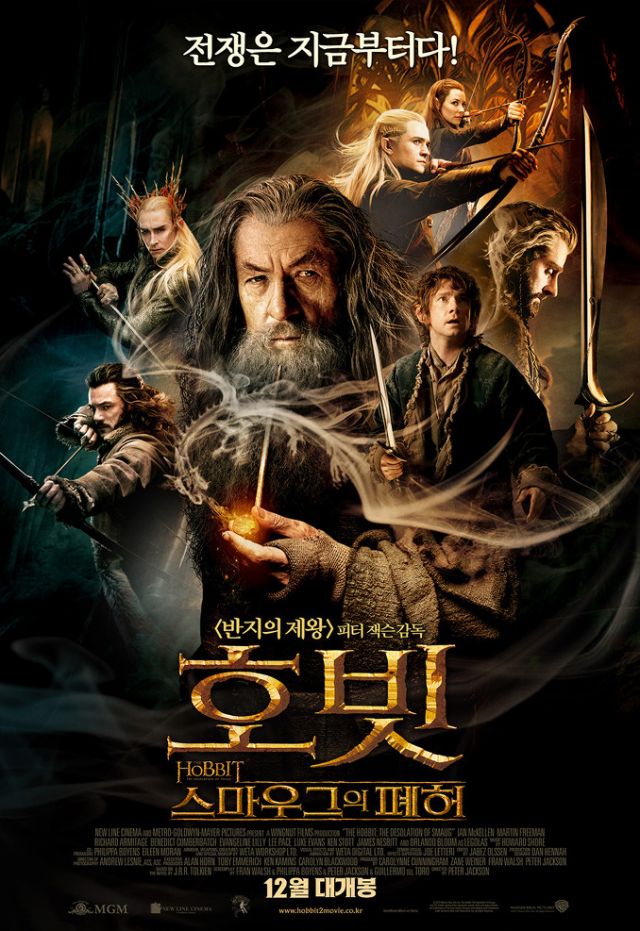 Peter Jackson's second instalment of Tolkien's "The Hobbit" gave the Korean box office a much-needed shot in the arm this past weekend. "The Hobbit: The Desolation of Smaug" attracted 829,583 (37.2%) filmgoers over 809 screens to snatched first place from Pang Eun-jin's fourth film "Way Back Home", which claimed a substantial 614,297 (25.2%) of its own. The success of both these new features meant that last week's number one, Richard Curtis's "About Time", was relegated to third with just 475,200 (20.3%).  Kim Hyun-seok's "11 AM", Kwak Gyeong-taek's "Friends 2", and Hong Ji-young "Marriage Blue" were all quarantined to the bottom half as the foreign flicks dominated the upper echelons of the chart.

J. R. R. Tolkien's 1937 novel "The Hobbit" started its big screen showings last year with "An Unexpected Journey", and the trilogy is set to conclude next year with the final chapter: "There and Back Again". The often-neglected middle child isn't doing as well as last year's opening act, but it is fast approaching its $225M production budget that will push it into the black. "The Hobbit: An Unexpected Journey" failed to make it to 3 million viewers when it was released late last year, and thus far it looks like this second round may mirror that performance. Pang Eun-jin's "Way Back Home" followed in second and tells the story of a wife (Jeon Do-yeon) deceived into smuggling drugs in France and gets sent to an island prison for her troubles. But her dutiful husband (played by Go Soo) preservers to bring her back home with their adorable little girl (Kang Ji-woo). The film has grossed $5.5M thus far and is looking good to overtake Bang's previous effort, "Suspect X", which scored 1.5 million admissions last year.

Last week Hong Ji-young's omnibus film "Marriage Blue" crept over the million admissions mark with 128,680 stubs, but only added 32, 091 (1.3%) this past weekend. Hong's romance melodrama, her fourth feature, now has a total ticket tally of 1,191,437 admissions ($7.8M) since its release late last month. "The Hunger Games: Catching Fire" came in eighth with 24, 577, while Kim Hyun-seok's "11 AM" trailed in ninth with 17, 510 of its own. Kim's action sci-fi effort started strong last weekend (158, 978 for third place), but took a serious tumble in week two as fans and critics quickly snubbed that initial excitement. Lastly, Kwak Gyeong-taek's "Friends 2" hung on in tenth, adding just 9, 640 to bring Kwak's much-anticipated sequel to 2.9 million admissions.