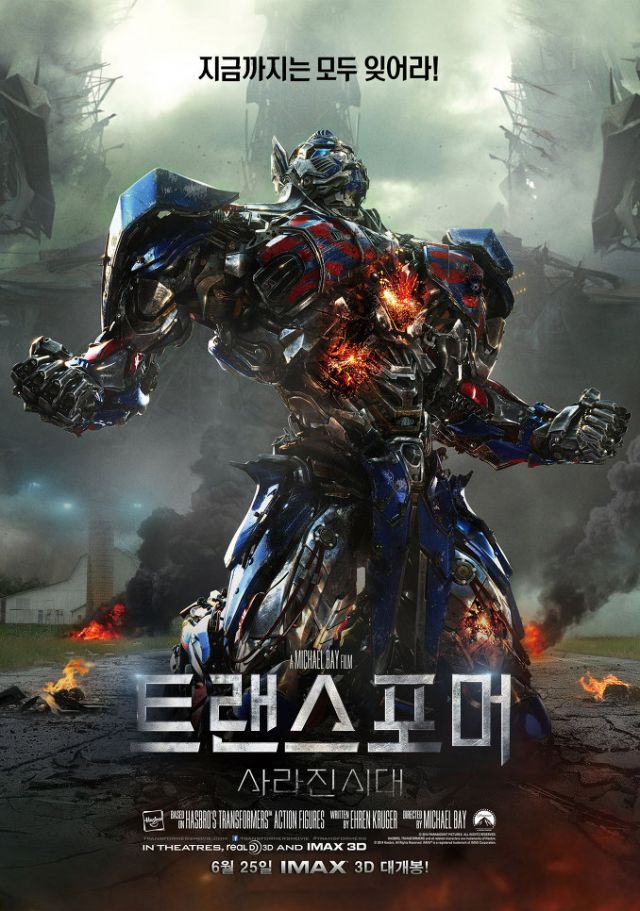 Micheal Bay's blockbusting "Transformers: Age of Extinction" managed to hold onto the top spot despite some serious local protest. Bay's latest was the sole star last weekend where it opened its Korean account with over 1.8M admissions, but the mech-monster was challenged here by a new entry in the form of Jo Beom-goo's "The Divine Move".

There was only a 35K difference between "Transformers" (960K – 40%) and "The Divine Move" (925K – 38%), even though the former had 300 more screens from which to pool from. "Transformers" has raced onto 4.1M admissions ($34.6M) in just two weeks, making it now the fifth highest grossing film of the year just behind "Edge of Tomorrow" (4.6M). Worldwide, "Transformers: Age of Extinction" has thus far grossed an incredible $575M.

Jo Beom-goo's newest entry "The Divine Move" came out slugging though, and over its allocated 789 screens it nearly managed a million admissions and the honour of humbling Bay's massive money-maker. Beom-goo's last film "Quick" performed well back in 2003 (attracting over 3.1M) and he'll be hoping that "The Divine Move" will have the endurance to performed even better than that fast-paced action outing.

In third place came another new Korean entry, this time a seasonal horror flick by debutant Oh In-chun. "Mourning Grave" attracted 216K (8.1%) over 455 screens to give the local representation in the top ten some impetus. In-cheon's promising opening act helped push "Edge of Tomorrow" down to fourth with 125K (4.9%), while Kim Seong-hun's drama "A Hard Day" fell to fifth with 114K to its name (4.5%).

The American comedy "Bad Neighbors" (simply "Neighbors" back in the U.S.) marked the second watershed in the charts as it only managed 18K (0.78%), but that modest haul was enough to outplay the Swedish film "The 100 year old man who climbed out the window and disappeared" (13K) which fell two places to seventh.

The biopic "Grace of Monaco" also took a two-step tumble from last weekend's effort. Olivier Dahan's film added just 10K to bring its total tally in Korea now to 216K. Lastly, this past weekend's top ten was rounded out by "Beauty and the Beast" (7.9K) and the critically acclaimed "Her" (7.6K) which has been a regular feature in the top ten now for an impressive seven weeks.