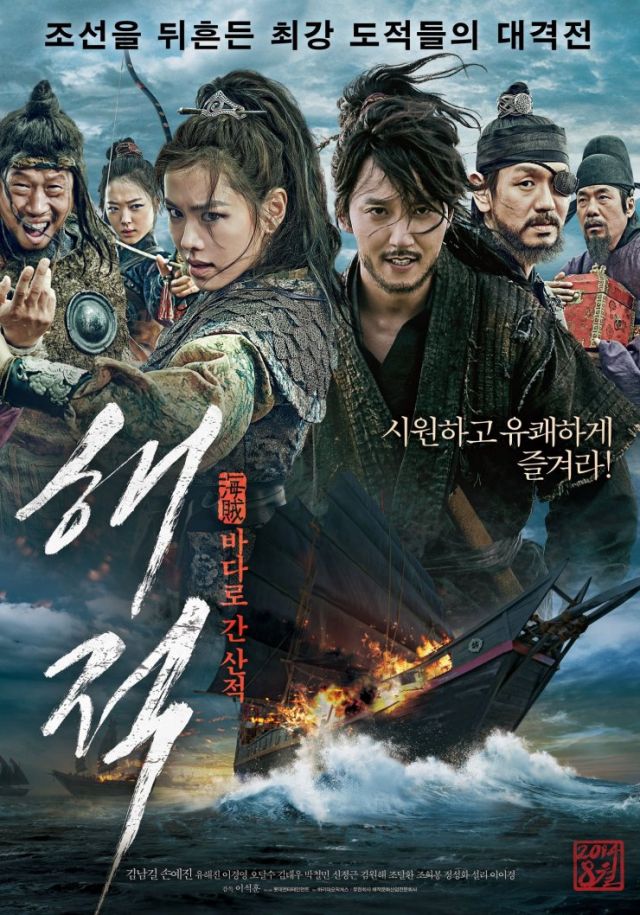 "Pirates" and "The Admiral" tussle at the top…

It's been a thrilling month for Kim Han-min's "The Admiral: Roaring Currents" as it quickly became the highest grossing Korean film in history by surpassing the 13M admissions "The Host" put up back in 2006. Kim's epic depiction of Admiral Yi Sun-Shin's legendary role in the Battle of Myeongnyang may have been pushed down into second, but the additional 802K (29.9%) it cornered over the weekend pushes this mighty piece of moviemaking to a record 16.2M admissions ($123M).

Last week there were only three local entries in the top ten ("Roaring Currents", "Pirates", and "Haemoo") and together they captured over 85% of the stubs up for grabs. This past weekend, however, saw a shuffle throughout the chart that was led by Lee Seok-hoon's "Pirates" supplanting "The Admiral" at the top of the pile. "Pirates", which is now entering its third week, attracted 951K filmgoers (35.2%) over 818 screens to put its total tally now to almost 6M ($44.6M); a figure that sees Lee's "Pirates" overtake "KUNDO" (4.7M) as the four highest grossing Korean film this year.

Also climbing up the ranks was 20th Century Fox's "The Fault in our Stars" by Josh Boone. The film made positve progression over the weekend, jumping from last weekend's fifth (156K) favourite film to this week's number three (166K). Boone's rise meant that Sim Seong-bo's sea drama "Haemoo" (aka "Haemoo") hand to take a step back, and ended the weekend in fourth with 6.2% (162K) of the sales going its way. "Haemoo", which stars Kim Yun-seok, Park Yoo-chun, Han Ye-ri, Lee Hee-joon and others, opened its account on the 13th and has since claimed 1.3M admissions ($10.5M).

Up four places to fifth came the American musical drama "Begin Again" with 151K, followed by the action star-studded "The Expendables 3" (77K). The third instalment of "The Expendables" series has struggle to take off, with critics and fans alike lambasting the ensemble feature for its poor execution and soft-core celebration of its iconic stars. The film was also leaked online which apparently also hampered its success on the big screen.

Phillip Noyce's sci-fi film "The Giver" came out last week and managed to secure over 53K (1.9%) during its first weekend out. The film is based on the 1993 novel by Lois Lowry and stars Jeff Bridges, Meryl Streep, Brenton Thwaites, and others. Not too far below came "Planes: Fire & Rescue" falling four places with 47K (1.6%), while Park Gyoo-taek's debut "Tunnel 3D" entered the fray in ninth with 37K (1.3%). Finally, this weekend's top ten was rounded out by DreamWorks' "How to Train Your Dragon 2", which added another 35K to bring its total in Korea now to just under 3M.