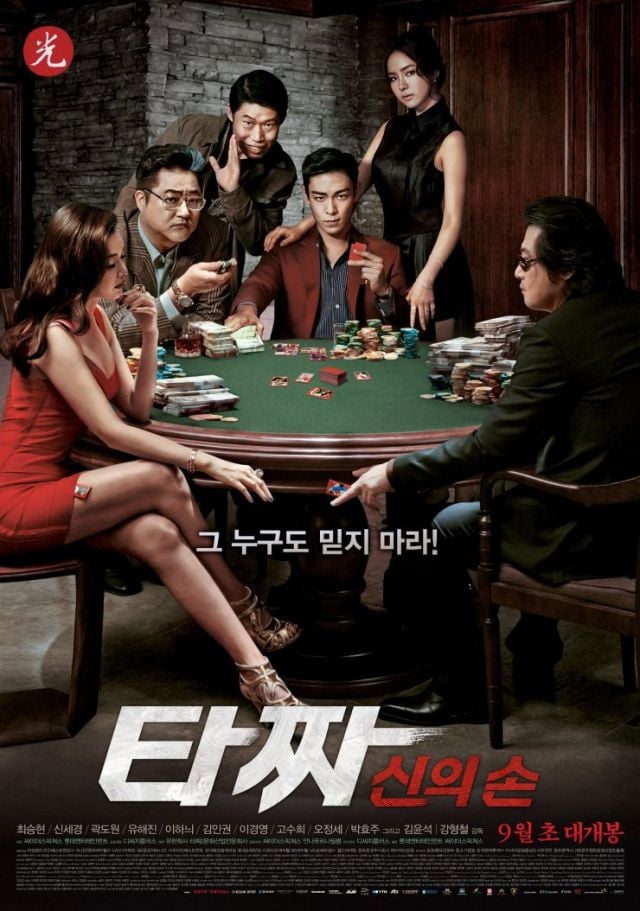 Kang Hyeong-cheol's comedy drama "Tazza: The Hidden Card" slotted straight into first over this past weekend by dislodging "Pirates" at the top of the box office pile. The film is the second feature based on Huh Young-man's manhwa of the same name, and after eight years fans can finally enjoy this second, star-studded, instalment.

"Tazza 2" claimed over 836K admissions (28.3%) over 890 screens to take gold with the help of actors Choi Seung-hyun, Shin Se-kyung, Kwak Do-won, Lee Honey, and Yoo Hae-jin. Last weekend's number one, Lee Seok-hoon's period romp "Pirates", seems to have finally reached it peak as it slipped to fourth with just 275K (8.7%). "Pirates" was released on the 6th of last month and has thus far amassed a telling tally of 7.4M ($56M). Lee's pirate period piece went toe-to-toe with the recording-smashing "The Admiral: Roaring Currents", and prior to this past weekend it's managed to remain Korea's film of choice.

The highest foreign entry came in the form of Luc Besson's "Lucy", a sci-fi action flick starring Scarlett Johansson, Morgan Freeman, Amr Waked, and local favourite Cho Min-sik. Besson's latest was released in the States back in July and has already earned its makers over $313M in sales. Following "Lucy" was Lee Jae-yong's touching family drama "My Brilliant Life" starring Gang Dong-won, Song Hye-kyo and Jo Sung-mok. This is Lee's sixth film and the screenwriting credits for it are shared between Choi Min-seok, Lee Jae-yong, and Oh Hyo-jin. "My Brilliant Life" opened its account with 447K admissions (13.9%) over 436 screens, and appears to be a great family feature just in time for the Chuseok crowds.

Steven Quale's "Into the Storm" started well last weekend, where is slotted into second with over 600K, but week two was less stellar as this disaster flick fell to fifth with just 253K (8%). Jonh Carney's "Begin Again" also took a tumbled towards the wrong end of the chart, falling from last week's fourth to sixth with its allotted 253K (6.5%). The latest in the popular "Step Up" film series made its way to Korean shores last Wednesday, and over the weekend this energetic dancing delight claimed the attention of over 149K locals (4.6%); outplaying "The Admiral: Roaring Currents" for seventh which wasn't too far behind with had another 115K (3.5%) to chalk up.

Followers of the Korean cinema circuit will know just how impressive Kim Han-min's "The Admiral: Roaring Currents" has been; a real stub-guzzling sensation that has broken virtual every box office record with its titanic total tally now of 17.1M ($129M). Last weekend "The Admiral: Roaring Currents" sunk to third, but is now rapidly descended down the chart having bank the biggest bucks in Korea's film history. "Maya The Bee 3D" followed in ninth with 54K (1.4%), and this weekend's top ten was closed out by the latest in the "Doraemon" film series: "DORAEMON THE MOVIE: NOBITA IN THE NEW HAUNTS OF EVIL – PEKO AND THE FIVE EXPLORERS".