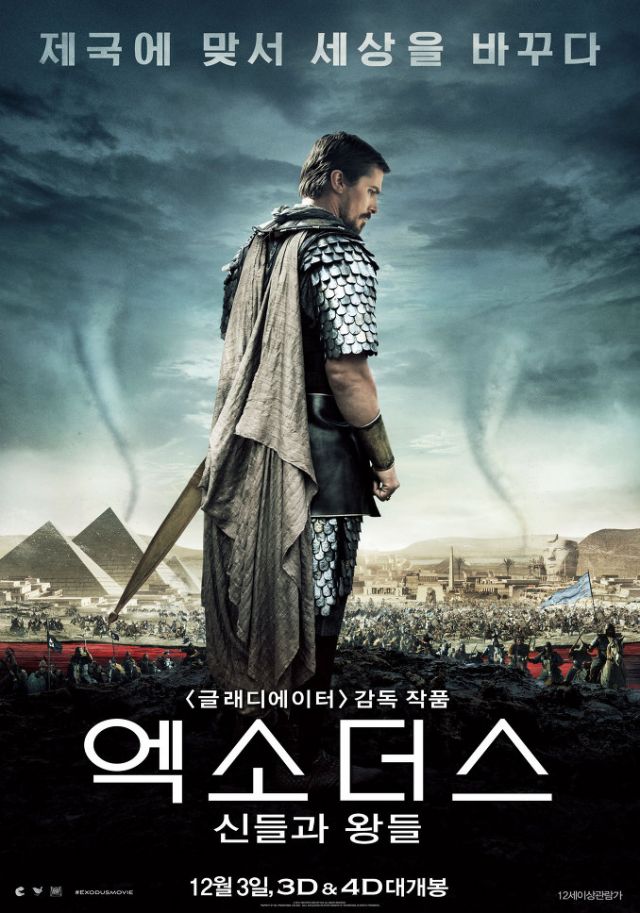 Nolan's "Interstellar" was November in Korea. It dictated terms and elevated itself well above the competition ("Fashion King", "Cart", "Fury", "Big Match"), each week and without fail. So successful was this space odyssey's reign, that its nearest challenger claimed no more than half of its black and bloated bottom-line each weekend.

It would take a complete chronological turnaround to upset this zealous zeitgeist on its way to glory, something equally epic containing a hero, not of some dystopian disaster, but of a mythopoetic past with a familiar message. It was Ridley Scott's cinematic imagining of Moses (Bale) and his earthly Exodus that would eventual stunt Nolan's blasphemous blockbuster (a film Ridley dedicates to Tony, his brother, who left us two years ago).

Jeon Hyeong-joon's comedy "Five Eagle Brothers" (his first in the chair) was released on the fourth and opened its account with 100K (5%) and sixth place. The film (which stars Yoon Sang-hyun, Song Sae-byeok, Lee Ah-i, Hwang Chan-sung, and Kim Ji-min) pooled its score from 346 screens and will no doubt find it tough going from here.

The Japanese animation "Howl's Moving Castle" (based on Diana W. Jones' novel of the same name; a film that had its premiere back in 2004) was re-released and performed solidly in seventh (64K - 3.3%), notably thumping "The Hunger Games: Mockingjay - Part 1" who fell four places to eighth. This penultimate picture has not caught on in Korea, and since its released on the 20th of last month it's scored a sorry 836K ($5.6M).

Lastly, the weekend's top ten was rounded out by "Dive Olly Dive: Happy Little Submarine" (based on the T.V series from Splash Entertainment), which claimed close to 17K, and then the sequel nobody asked for: "Dumb and Dumber To" (16K).