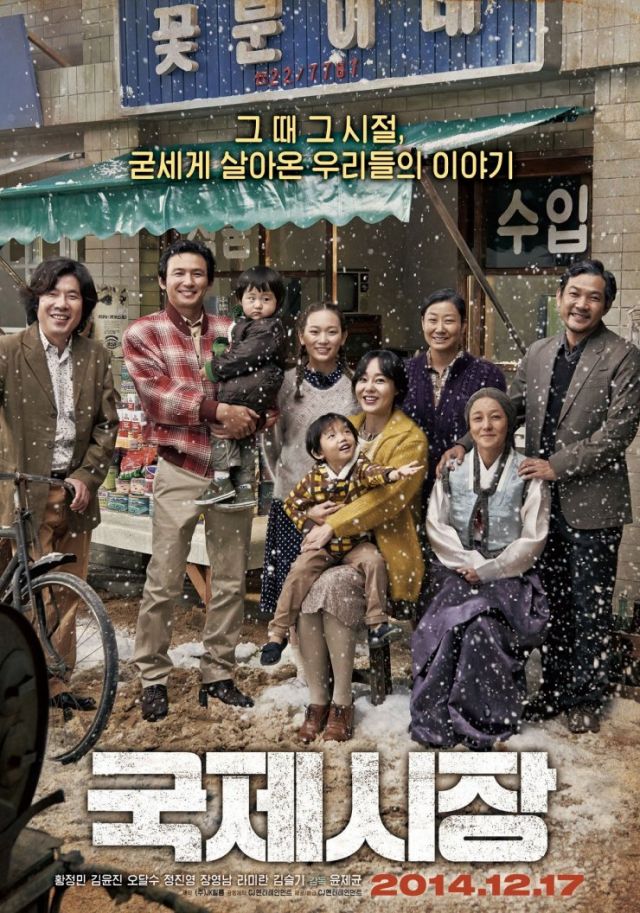 The Korean box office might not be roaring currently, quieted, perhaps, by the success of JK Youn's heartfelt war drama: "Ode to My Father". Since its released mid-December, "Ode to My Father" has held firm at the top of pile, and its arrival at the ten-million-views mark is dawning. The film added 1.1M stubs over the weekend, continuing its phenomenal run and pushing its total tally now to 9.6M ($69.7M). If, or rather when, it reached 10M admissions, it will become only the eleventh film in Korean film history to do so, placing it in Korea's pantheon of pictures; a hall of fame and fortune that includes such wonders as "Silmido" (the first of its kind), "Snowpiercer", "The Attorney", "The Thieves", and, more recently, "The Admiral: Roaring Currents".

"Taken 3" has thus far been its closest rival having remained in second for the past two weeks behind Yoon's "Ode". This Neeson-studded action flick racked up another 364K stubs (14.1%) over the weekend, moving the film's bottom line in Korea now to just over $13.1M (1.7M admissions). But this stoic hero also had constant competition in the animated form of DreamWorks' "The Penguins of Madagascar". Last weekend "The Penguins" pocketed 498K (12.2%) over 615 screens for third place; this week that haul was reduced to 301K (10.8%) from 527, enough to retain its podium finish. Thus far "The Penguins of Madagascar" has attracted 1.3M filmgoers and banked $9.6M.

In fourth entered Angelina Jolie's war drama "Unbroken"; which is based on Laura Hillenbrand's "Unbroken: A World War II Story of Survival, Resilience, and Redemption", a best-selling biography on the life of Louis Zamperini. The film claimed 5.5% of the box office pie during its opening weekend (147K) over 399 screens, only narrowly outperforming "Paddington" and his own earnest entry into the fray.

Paul King's "Paddington" (which is, like Jolie's film, based on other stories. This time it's Michael Bond's character "Paddington Bear", who made his first appear back in 1958 in the children's book: "A Bear Called Paddington") came close to overtaking "Unbroken" with its 142K (5%), but even with a handful more screens ("Paddington" was give 408) Bond's marmalade-loving classic had to eventually be content with fifth.

The hit documentary "My Love, Don't Cross That River" is still with us, but down two places as it slowly steps back from its record-breaking run. Jin Mo-young's tale of his '100-year-old lovebirds' added another 137K (5.1%) to bring its tally now to 4.6M ($33.3M, making it the highest-grossing independent film to be released in Korea).

Kim Hong-seon's "The Con Artists" was next, and found itself down two places in seventh with 122K (4.7%), while Jeong Beom-sik's "Casa Amor, Exclusive for Ladies" opened its account in eight with 74K (2.9%). Lastly, the weekend was closed out by "The Hobbit: The Battle of the Five Armies", which continued to under perform with just 44.9K (1.8%), and the Australian science-fiction thought experiment: "Predestination" (42K - 1.6%).