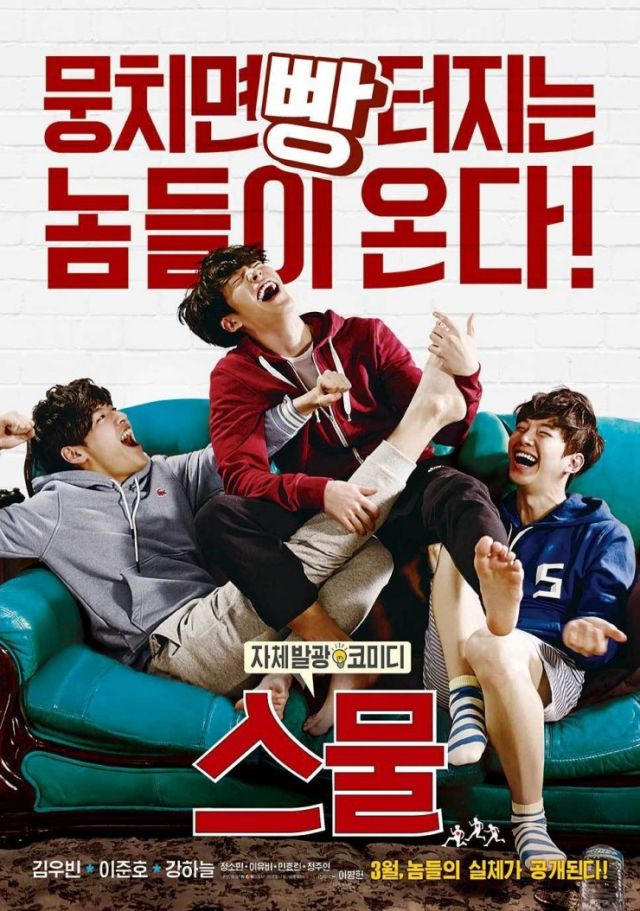 Lee Byeong-heon-I's "Twenty" entered the fray last Wednesday and dominated proceedings over the weekend by capturing 48% of box office pie. The film, which stars Kim Woo-bin, Lee Junho and Kang Ha-neul, attracted an impressive 852K filmgoers across 925 screens to end the weekend at the top; albeit during a quiet week in terms of turnout.

The film's closest rival was last week's number one, Damien Chazelle's "Whiplash". Week three for Chazelle's award-winning drama saw its popularity sharply decline in light of Lee's attractive comedy. Last weekend the film claimed 374K for first place, but seems to have already past its prime and now sits on a total tally of just 1.2M ($8.9M) since its release on March 12th.

The British spy flick "Kingsman: The Secret Service" has been a consistent performer for the past two months in Korea. Matthew Vaughn's latest has featured strongly during that time and with the additional 213K (23%) it claimed over the weekend, the film now sits on a healthy total tally of 5.6M ($42M). The film's position in the chart also marks somewhat of a watershed, because from fourth place onwards no other films managed 150K admissions or more.

"Insurgent" by Robert Schwentke was the second new release to crack a top ten finish as it claimed fourth place with 147K admissions (8%) across 479 screens. Close behind was the re-imagining of Disney's Cinderella by Kenneth Branagh, and stars Lily James as the popular princess in question. Last weekend the film entered in third (with 311K), but the heavy competition here forced Kenneth's efforts to fall to fourth with just 146K (8%).

"Run all Night" with the Lia Neeson, Joel Kinnaman, Common, and Ed Harris, has already grossed $50M worldwide (its budget is estimated at around $43.5M), but Korean audiences have been largely unimpressed and just 36K (2.1%) came out to pass on their hard-earn won. Not far behind this lukewarm feature fell Son Yong-ho's crime drama "The Deal", with Kim Sang-kyung, Kim Sung-kyun, and Park Sung-woong. Released on the 12th of this month, "The Deal" has since attracted the interest of 842K filmgoers, just 20K (1%) of which managed to come from this past weekend.

"Chappie", a South African sci-fi flick by Neill BlomKamp, fell two places to eight with 8.9K (0.5%) as it approaches 600K; many fans and critics have reported to be largely uninspired by BlomKamp's second attempt at the genre, especially after the stunning success of his iconic "District 9". Sin Han-sol's "Granny's Got Talent" is still with us and fighting hard at the bottom of log with 8.3K (0.5%), moving its total tally now to a disappointing 516K ($3.6M), while the U.S. Film "The Good Lie" by Philippe Falardeau (starring Reese Witherspoon) attracted 7.5K in its first week to take tenth.