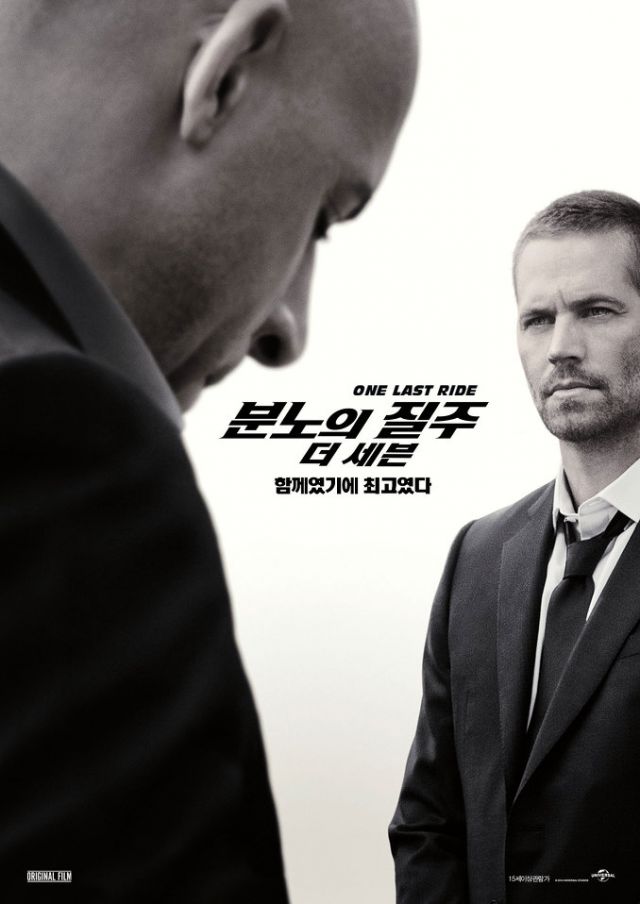 April saw the release of a number of competitive films, five of which entered the fray and featured in this past weekend's top ten. The much-anticipated "Fast & Furious 7" (starring the late Paul Walker alongside Vin Diesel) hit theatres worldwide recently, and Korean audiences welcomed the seventh instalment by raising it up as the country's current number one.

James Wan's "Fast & Furious 7" attracted 908M filmgoers across 982 screens to enter in first, capturing 47% of the box office pie and dislodging Lee Byeong-heon-I's comedy "Twenty" as Korea's favourite feature. "Fast & Furious" has already surpassed its estimated production budget of $250M, having banked over $384M, and its first weekend haul in Korea was a promising sign for this high-octane hit and its prospects in the South.

Last week's number one, "Twenty", starring Kim Woo-bin, Lee Junho, and Kang Ha-neul, had to take a step back in the wake of Wan's popular pic, and claimed 644K (31%) to bring its new total to 2.2M ($15.6M). "Twenty" was released late last month and was able to top the box office listings last weekend when it first entered the fray.

In third place fell one of the most popular foreign pictures of the year: "Kingsman: The Secret Service". Since the second week of February, "Kingsman" has stiffly competed at the top of the charts and has attracted just under 6M filmgoers ($44.8M) since its release. Over the first weekend of April, the British spy comedy banked 117K (6.2%), and was closely tailed by Damien Chazelle's "Whiplash" which managed 114K (5.8%) in fourth. Worldwide, "Whiplash" banked over $27M (the film was made for just $3.3M).

The latest Cinderella movie hovered in fifth with 59K (2.8%), moving its total tally now to 675K ($4.8M), with Robert Schwentke's "Insurgent" (starring Shailene Woodley and Theo James) slipping to sixth with 22K (1.1%) going its way. Seventh to tenth were all new releases: the American drama "Song One" (with Anne Hathaway and Mary Steenburgen) managed 20K; the Italian animation "Pet Pals in Windland" attracted 18.5K; the American supernatural horror film "It Follows" opened with 18K; and lastly, the weekend was rounded out by Cho Jung-rae and Kim Bo-kyeong-I's documentary "Foulball" with 13.6K.