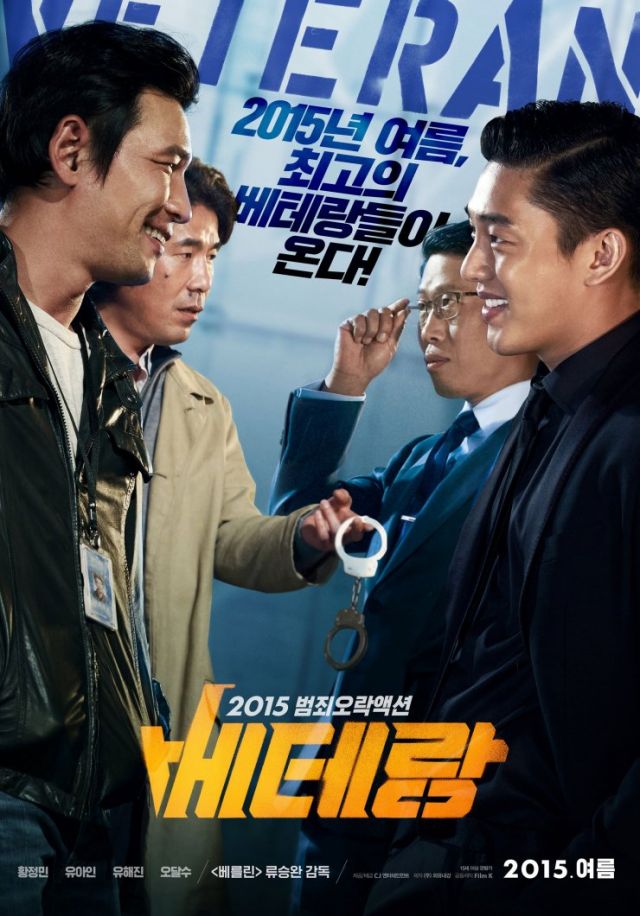 Second and third place once again went to Baek Jong-yeol's "Beauty Inside" (401 thousand admissions) and Choi Dong-hoon's "The Assassination" (344 thousand). Baek's romantic melodrama was released two weeks ago and critics and fans have enjoyed watching Han Hyo-joo take the led in Baek's directorial debut (having previously worked on "Old Boy", "Voice of a Murderer", and "Sad Movie" in various capacities). "Beauty Inside" entered in second place last week with 15.5% of the sales, and defended that position here with another 16% going its way. Not far behind came "The Assassination" with 13.5% (233 thousand), who also recently pushed past the 10 million mark and is still fighting. Choi's hit retained a podium position and has earned just under $80 million (12.1 million admissions) since its release late in July.

Fourth place went to local newcomer "Untouchable Lawmen" by Shin Jai-ho and stars Im Chang-jung and Choi Daniel. The two play a profiler and a detective who investigate a religious cult that's manipulating the country. The film was allocated 446 screens and managed to attract 198 thousand filmgoers to its cause in week one (7.7%). "Wonderful Nightmare" occupied sixth place last weekend (4%) but gained ground over the weekend to make the top five a wholly Korean affair. Directed by Kang Hyo-jin, "Wonderful Nightmare" follows a lawyer who loses everything and then is, strangely, reborn as an ordinary housewife. "Wonderful Nightmare" claimed 125 thousand admissions which bumped its tally now to 849 thousand ($5.3 million).

The action comedy "American Ultra" entered in sixth place with 91 thousand admissions (3.7%) from 341 screens, and the latest "Mission Impossible" followed with another 75.8 thousand of its own. "Mission Impossible: Rogue Nation" stars one of South Korea's favourite foreign actors, Tom Cruise (here playing Ethan Hunt), and has so far attracted 6 million filmgoers ($40 million). It's been over a month since Hunt's latest mission hit Korea, and it's slowly being muscled out as it falls two places from last weekend's fifth position. Worldwide, "Mission Impossible: Rogue Nation" has made over $479 million at the box office.

The spinoff animation "Minions" was made for close to $74 million and worldwide it's grossed over a billion; around $15 million of which came from Korea. This popular animated feature claimed eighth place over the weekend (down just one place) with the 65.4 thousand admissions it sold (2.3%), followed by the French drama "The Bélier Family" by Eric Lartigau with 36 thousand admissions (1.3%). Lastly, the weekend's top ten was rounded out by the Disney and Pixar's "Inside Out" with 33.4 thousand (1.2%).