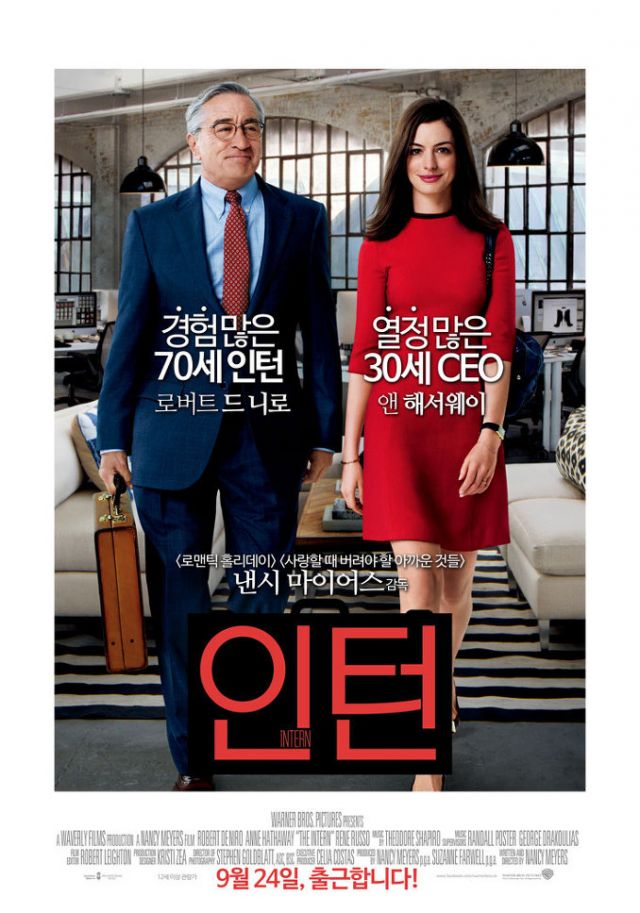 Nancy Meyers' "The Intern" has dislodged Lee Joon-ik's popular period piece "The Throne" to become the country's new number one. Lee's latest has been sitting pretty at the top for three weeks now, and since its release mid-August it's managed to amass a total tally of 5.5 million admissions, 492 thousand of which came from this past weekend. But a second week in the charts has helped raised Meyer's film to the top in a tightly contested weekend where the podium placements could have gone either way.

Starring Robert De Niro and Anne Hathaway, "The Intern" tells the tale of successful e-commerce CEO who agrees to accept seniors as part of a social outreach program. The film has already made $72.1 million worldwide and featured in fourth place last weekend with 337 thousand admissions when it was released in Korea. Week two saw the film rise to the top of the pile with 532 thousand admissions going its way (26.6%) across 659 screens. So far, the American comedy has sold 1.4 million tickets ($10 million) in Korea and has managed to jump three places to settle in first place.

Dystopian sci-fi has proved to be a popular genre for young adults in recent years and the second feature in the "Maze Runner" series of films is keeping that trend alive and well and in the black. Wes Ball's adaptation of James Dashner's second book in his popular series of books has already grossed $211 million worldwide, and since its release in Korea on the 16th of last month, the film has made $17.5 million (2.6 million admissions) on Korea soil alone. Like "The Accidental Detective", "Maze Runner: The Scorch Trials" slipped a place in the charts in light of the rise of "The Intern" and ultimately was only able to secure another 191 thousand across 414 screens.

Ryoo Seung-wan's "Veteran" is now the third highest-grossing Korean film of all time having moved its total tally to 13.3 million ($89 million). Over the weekend the film added 82 thousand to its cause (4%), but, to be fair, it has been in the charts since early August. Incredibly, "Veteran" has now surpassed "The Thieves" and "The Host" as Korea's third most successful feature, just behind "Ode to My Father" (14.2 million) and "The Admiral: Roaring Currents" (17.6 million). In recent years there has been a significant rise of local productions that are reaching, and pushing past, the 10 million admissions mark, and "Veteran" is the second movie to achieve this this year (the other being Choi Dong-ho's "The Assassination" with 12.6 million admissions sold).

The French animation "Mune" was next in sixth place with 191 thousand tickets sold (2.5%), followed by Cheon Seong-il's war drama "The Long Way Home" with 43 thousand (2%). Masayuki Ochiai's supernatural horror film "Ju-on: The Final Curse" was released in its home country of Japan back in June and arrived in Korea on the first to claim 35 thousand during its first weekend out. Close behind Ochiai's efforts came the British-American production "Everest" on 31 thousand (1.8%), and the first weekend of October was rounded out by Dan Fogelman's comedy drama "Danny Collins" with 22.7 thousand (1%).