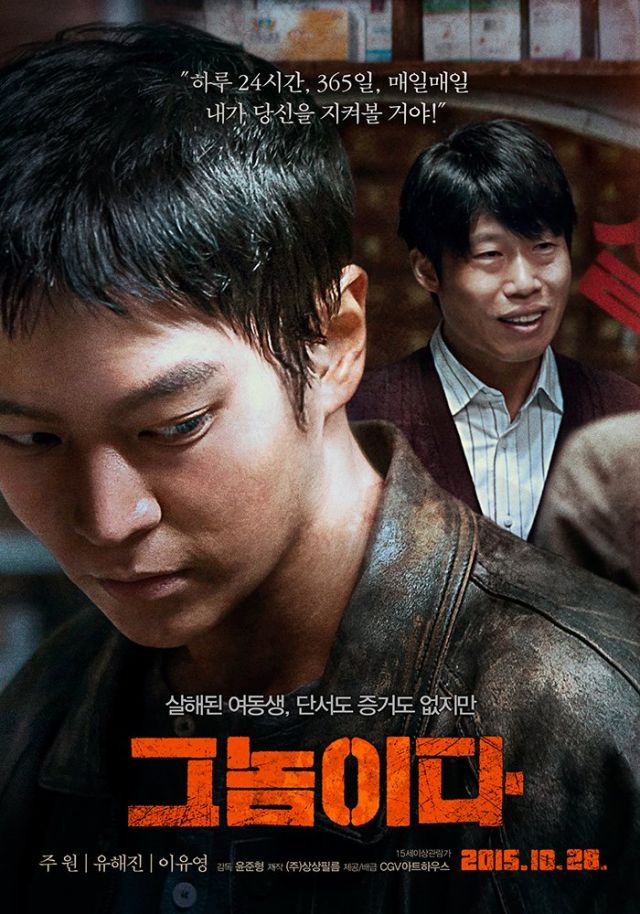 The box office was abuzz this past week as a host of new entries came and complicated the fray and shook things up from top to bottom. Last weekend Kim Bong-joo's action thriller "The Phone" (starring Son Hyun-joo) topped the chart by capturing 32% of the pie; this week, however, it was nudged down a notch with the release of Yoon Joon-hyeong's new thriller "Fatal Intuition".

"Fatal Intuition" stars Joo Won and Yoo Hae-jin in an urban thriller that follows a man on the trail of his brother's killer. The film was given 681 screens from which to pool from (the same as "The Phone"), scored 456 thousand admissions (28%), and so surpassed last weekend's number one this time around by around 100,000 stubs. "The Phone" was competitive, bringing in another 355 thousand to its cause, and with this past weekend's haul counted, the film's total tally is now approaching $10 million (1.4 million admissions).

Close behind fell the science fiction thriller "The Martian" with 330 thousand admissions (20%). Ridley Scott's adaptation was made for around $108 million, and worldwide this action-packed thriller has grossed nearly half a billion ($428 million, to be precise); $32.1 million coming from South Korean cinephiles. Nancy Meyer's "The Intern" remained unmoved in fourth place with 138 thousand admissions (8.4%) which moved its total tally in Korea now to 3.4 million ($23.6 million), followed by a new foreign entry, "The Walk" by Robert Zemeckis.

"Walk" is an autobiographical film based on the story of Phillippe Petit's daring mission to walk a tightrope between the Twin Towers of the World Trade Centre back in 1974. American filmgoers have been ambivalent towards  Zemeckis' efforts, and in Korea its first weekend out yielded 120 thousand admissions (9%). Roh Deok's drama "The Exclusive : Beat the Devil's Tattoo" fell three places to find itself in sixth place with 75.8 thousand admissions (5%), followed by a new foreign entry, "The Man from U.N.C.L.E"., by Guy Ritchie.

Ritchie's spy comedy is based on the 1964 television series produced my MGM, and worldwide this modern reboot is already in the black having grossed $100.5 million (the film was made for an estimated $75 million). The film was officially released in America back in August, but it finally arrived in Korea last week and from the 361 screens allocated, the film managed to claim 55.6 thousand admissions (3%).

Jeon Yoon-soo's "Sorry, I Love You, Thank You" (aka "Summer Snow"), another new local entry, entered the charts in eighth place. The film claimed just 18.8 thousand admissions across 341 screens in its first weekend out and about. Finally, the list of Korea's top flicks was rounded out by the internationally co-produced sci-fi comedy "The Lobster" (12 thousand admissions for 0.8% of the box office pie) and, lastly,  Kwon Oh-kwang's "COLLECTIVE INVENTION", fell five places with 7.5 thousand (0.5%).