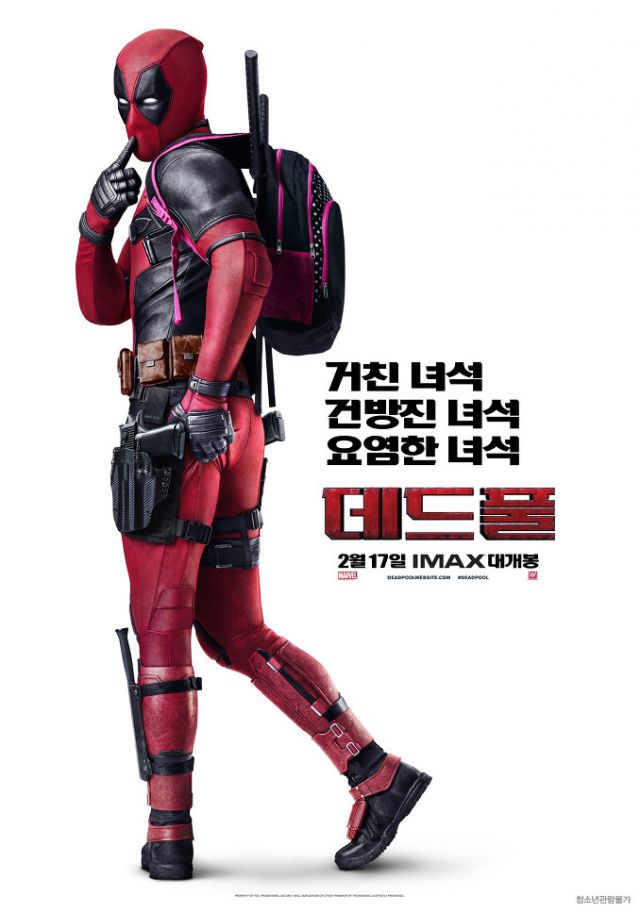 "Deadpool" dislodges "A Violent Prosector" at the top...

For the past two weeks Lee Il-hyeong's crime drama "A Violent Prosecutor" has been flying high atop Korea's box office, but week three for Lee's blockbuster saw that string of pole positions broken by the latest superhero film to come our of Marvel Studios.

Tim Miller's "'Deadpool" had over a thousand screens from which to pool and attracted over a million filmgoers ($7.4 million, 43.5%) during its first weekend out. The film was released three days after Valentine's Day and has already it's raced to 1.7 million admissions ($11.6 million); worldwide, "Deadpool" has grossed just under half a billion.

"A Violent Prosector" has vaulted to 9 million admissions in just three weeks, 452 thousand of which came from this past weekend (17.2%). Last weekend the film claimed the top spot with 61% of the box office pie across 1,648 screens (the weekend before was even better with $73.7% from 1,706) but saw its screens slashed down to 741 here as it approaches ten million admissions.

There wasn't too much between third and fourth place: Walt Disney's "Zootopia" was next with 327 thousand coming out in support (12%), followed by another newcomer in the form of Park Hyeon-jin's romantic comedy "Like for Likes" starring Lee Mi-yeon and Choi Ji-woo (320 thousand, 12.2%). Sixth place was, however, the watershed as the tallies started to taper off somewhat starting with another new local entry: Lee Joon-ik's "DongJu, The Portrait of A Poet" starring Kang Ha-neul and Park Jung-min.

The third installment in the "Kung Fu Panda" series of films was next. "Kung Fu Panda 3" was released in Korea late January and has now grossed just under $25 million in Korea alone. The film was made for an estimated $145 million, and so far this popular animated comedy has banked $294.2 million worldwide. For the past two weeks, the film has been sitting pretty in second place but took a four-place tumble to sixth here having claimed just 97.9 thousand (3.5%).

The British biographical film "The Danish Girl" by Tom Hooper occupied seventh with 36 thousand stubs going its way (1.4%), its first weekend out, followed by Todd Haynes' romantic drama "Carol" starring Cate Blanchett and Rooney Mara. Lastly, February's penultimate weekend was rounded out by the Japanese anime "AIKATSU! The Movie" on 15.8 thousand (0.5%) and the Mexican animation "A Rooster With Many Eggs" with 13 thousand (0.4%).