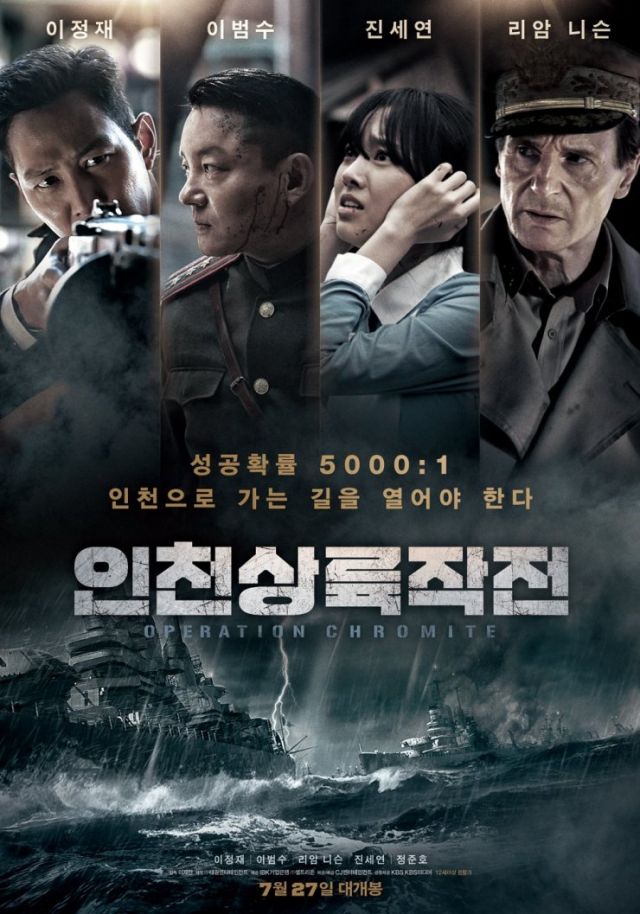 "Operation Chromite" overtakes "Train to Busan" as Korea's number one...

"Operation" Chromite" is based on the true story about General McArthur and a top secret spy mission leading up to the Battle of Inchon in 1950. The film stars Lee Jung-jae, Lee Beom-soo, Jin Se-yeon, as well as Liam Neeson as General McArthur himself.

The latest "Ice Age", "Ice Age: Collision Course", a 3D animation film, fell three places to sixth having attracted 98,742 admissions (1.8%) and was followed by another 3D animation, Trevor Wall's "Norm of the North" on 67,265 (1.3%). Two Japanese films were next: Shigeharu Takahashi and Shinji Ushiro's "Yo-Kai Watch Movie: It's the Secret of Birth, Meow!", and Hirokazu Koreeda's family drama "After the Storm". "Yo-Kai Watch Movie: It's the Secret of Birth, Meow!" was released in Japan back in 2014, but it's finally made its way onto Korea's big screens where is has, with the 61,130 admissions (1.1%) claimed over the weekend, grossed $1.8 million (265,066 admissions) since its released late July. "After the Storm" was screened at Cannes this year and the films first weekend out in Korea yielded 16,936 admissions (0.4%) from 71 screens. Finally, the last weekend of July was rounded out by the German film "I'm off then" on 9,237 admissions (0.2%).