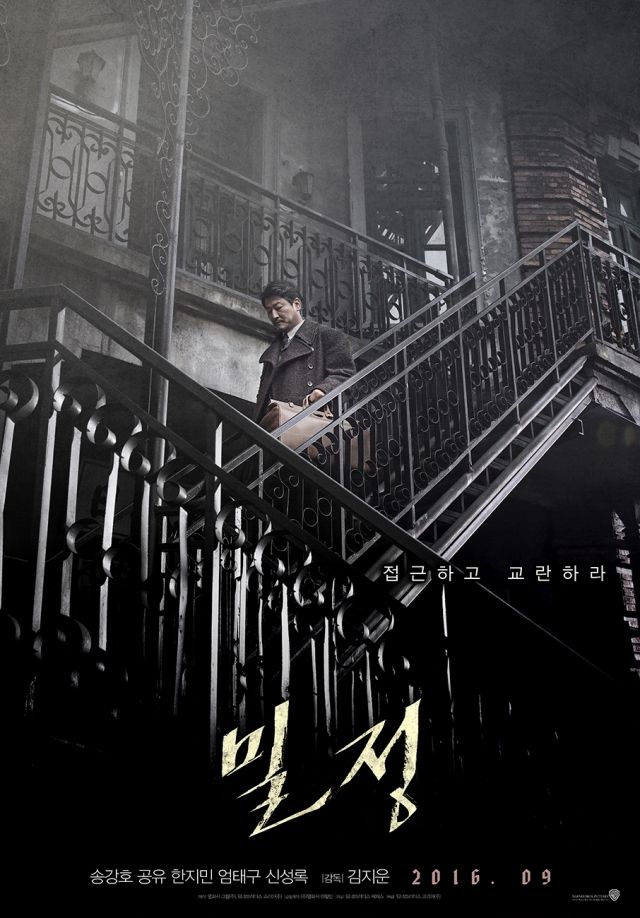 The last weekend of September was a relatively subdued affair, but the country's official Oscar submissions, Kim Jee-woon's "The Age of Shadows", was still able to secure pole position by capturing 38.6% of the box office pie. From the 1,105 screens allocated, "The Age of Shadows" recorded 459,046 admissions (38.6%) which moved its bottom line now to just under 7 million (6.8 million admissions/$51 million).

Kim Jee-won's latest has occupied first place since its release earlier in September; it claimed 1.6 million (69.1%) during its first week to topple "Tunnel" at the top, and its second weekend attracted 2 million filmgoers (53.2%). The film, which stars Song Kang-ho, Gong Yoo, and Han Ji-min, is now the fifth highest-grossing Korean film of the year behind "Operation Chromite" (7 million), "Tunnel" (7.1 million), "A Violent Prosector" (9.7 million), and "Train to Busan" (11.5 million)-"Captain America: Civil War" (8.6 million) and "Zootopia" (4.7 million) are currently the only foreign flicks in Korea's top ten in third and ninth respectively.

Timur Bekmambetov's adaptation of Lew Wallace's 1880 novel, "Ben-Hur" (starring Jack Huston), remained in second place with 191,625 admissions (15.8%), shifting its total to 1.2 million (last weekend it claimed 594,486), followed by another adaptation of an iconic tale: "The Magnificent Seven" by Antoine Fuqua. Like Wallace's remake, Fuqua's retained its position on the podium during this quieter week and is now closing in on a million admissions (currently 879,975).

Not far behind "The Magnificent Seven" was the Japanese action-horror flick "I Am a Hero" (based on Kengo Hanazawa's 2009 manga of the same name) by director Shinsuke Sato. The film was released in Korea last Wednesday and captured 9.1% (100,684) during its first weekend out. The local historical drama "The Map Against the World" (starring Cha Seung-won, Yu Jun-sang, Kim In-kwon, and Nam Ji-hyun) by director Kang Woo-seok slipped just the one place to finished up in fifth with 49,640 admissions (3.9%), moving its total tally now to 947,146 ($6.8 million), with "Bridget Jones's Baby" (starring Renée Zellweger, Colin Firth and Patrick Dempsey), another new entry and the sequel to the popular 2004 film, taking sixth place with 41,251 admissions (3.6%).

Clint Eastwood's biographical drama "Sully" was another new release that managed to crack a top ten finish. The film is based on the extraordinary actions of Captain Chesley Sullenberger (Tom Hanks) who managed to save the lives of 155 passengers in 2009 during an emergency landing of a jet on the Hudson River. The film had 342 screens from which to pull and attracted 43,183 admissions (3.8%); worldwide, "Sully" has banked over $126.3 million from an estimated budget of $60 million.

The sequel to the 2010 adaptation of Lewis Carroll's "Alice in Wonderland", "Alice Through the Looking Glass" by James Bobin, fell three places to eighth after capturing just 2.5% of the box office pie (30,931 admissions). Since its release in America and the UK in May, "Through the Looking Glass" has grossed $298.8 million (the film was produced for around $170 million). The Chinese-American animated feature "Rock Dog" also drifted down the chart after it captured just 2.3% of the total sales (29,923 admissions), which moved its bottom line 204,356 admissions ($1.4 million), with Shin Jai-ho's action comedy "Duel: Final Round" bring up the rear. "Duel: Final Round", Sin's seventh film to date (others include "100 Days with Mr. Arrogant", "Wedding Scandal" and "Days of Wrath"), attracted 15,986 filmgoers (1.3%) during its first weekend out.